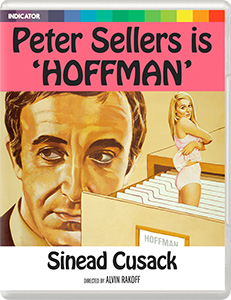 When asked to name Peter Sellers movies, I would imagine that “Hoffman” would hardly be mentioned. Not because it is a terrible movie, but due to that fact that it is little seen, and wouldn’t be seen at all if Sellers had his way and bought the rights to the movie so that he could destroy it! (find out why he wanted to in one of the great special features).

Thanks to Powerhouse Films and their Indicator series of releases though, it can now be watched as often as you want in a new restoration from a 4K scan of the original negative.

Sellers plays the titular Mr Hoffman; a middle aged bachelor who obsesses over his young secretary Miss Smith (Sinéad Cusack), whom he blackmails into staying with him at his apartment for a week or else he’ll give information to the police about Miss Smiths fiancé who has been stealing from Hoffman’s company.

The whole movie is essentially a two hander with Sellers and Cusack in great form, both of them keeping me transfixed with their performances. Sellers playing a decidedly shady character whose motives at the beginning seem purely sexual, but as the narrative unfolds a softer side to his psyche begins to appear. While Cusak’s initially scared and nervous Miss Smith begins to feel more at home as time passes by and becomes more confident in how she can converse with Hoffman, occasionally becoming the dominant one in their forced relationship.

“Look like you want to be fertilised” is one of the first lines uttered by Hoffman as he watches Miss Smith stand by his bathroom mirror after she first arrives, and after leading her to the bedroom she was as nervous as I was while watching them.

However, the narrative takes both characters on interesting (though not always completely believable) character arcs that I wasn’t expecting, with some unexpected twists and turns long the way.

While not Sellers best cinematic outing, Hoffman has him giving a superb performance that should definitely be watched if it has so far passed you by.