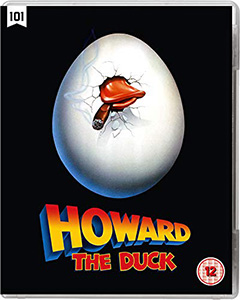 A critical and commercial failure upon it’s release in 1986, Howard the Duck has gone on to acquire a cult following…and rightly so. How can you not want to watch a movie that has a cigar smoking talking duck from another planet, who saves the earth from extinction by an alien predator that is shown as a stop motion monster?

AND the duck gets sexy with a female 80’s hair metal band leader (Lea Thompson) who cranks out a few songs during the running time.

AND there’s an appearance by a young Tim Robbins as an overly excited scientist trying to get Howard back to his home planet.

AND Jeffrey Jones gets possessed by an evil alien.

My list could continue with many reasons why Howard the Duck should be on your ‘to buy’ list, and no better way of getting than this fantastic release from 101 Films.

Beginning with Howard peacefully passing away the time sat in his comfortable armchair, a strange rattle and a swirl of bright light drags him out of his apartment, through all of it’s walls (passing a topless female duck in a bubble bath along the way) and into outer space, finally throwing him unceremoniously into the back streets of Cleveland.

It is here that he befriends Beverly (Lea Thompson), whose dream of making it big in the rock world with her female band is being held back by a corrupt manager. Time for Howard to step in and save the day…and not for the last time in this 110 minute action/comedy romp that will have your jaw dropping to the floor more times than a Warner Bros cartoon character.

To say that Howard the Duck is a crazy movie is a huge understatement, but with that craziness that initially put off most of it’s original audience back in 1986, there comes a huge dollop of FUN.

The effects often look awful (the exception being the superb articulated head of Howard…which I’d still take over any cgi character) but have now gained a certain charm that draws you further into the movie.

Some things just get better as they age, and Howard the Duck is an example of this. Once lambasted by cinemagoers and critics worldwide, this particular duck has acquired a more palatable flavour as the years have ticked by.

Invite some friends round, grab a few drinks, order some food (just don’t order crispy duck as that would be just wrong!) and settle back for an adventure that I guarantee that you won’t forget.

A superb set of extras round off a great release from 101 Films.

Howard the Duck is released on 22nd April 2019 and you can buy it by clicking HERE. ALL money raised by purchasing from Amazon via our website is given back to our listeners and followers in upcoming competition prizes. The more people buy, the bigger our prizes.