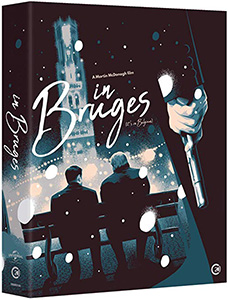 Imagine the joy I felt on seeing Colin Farrell as Ray in ‘In Bruges‘, excitedly run over to a film-in-film set with a delighted (Irish accented) cry of ‘Midgets! They’re filming fuckin MIDGETS’!

Some films just have it, you know it’s going to be a belter and as the voiceover starts with ‘After I’d killed him, I dropped the gun in the Thames, washed the residue off my hands in the bathroom of a Burger King, and walked home to await instructions’ you are straight into the story with this darkly comedic tale of displaced hitmen.

A young inexperienced hitman, Ray (Farrell), has botched his first job by accidently killing a little boy for East End crime boss Harry Waters (Ralph Fiennes) and needs to ‘go away’ for a while. Harry’s other employee and possible ‘teacher’ (also Irish) to Ray is Ken (Brendan Gleeson) who takes them both off to Bruges until things cool down.

Ken is an older gangster who, armed with a guidebook, sees the Belgian town as a sort of fairytale holiday experience. The only problem is, Ray acts like a 4 year old in a constant strop.

Beautiful Bruges (I’ve never been) is misty and twinkly with Christmas lights, as we follow these 2 hitmen for their small ‘holiday’.

Ray is mightily pissed off being stuck in this purgatorial ‘shithole’ (lots of medieval paintings underline this). Ken makes Ray traipse dutifully around the city’s Catholic shrines and get into fights with mainly Americans.

Stranded in a city with blood on his hands, Ray can’t cope. Here Colin Farrell proves just what a truly amazing actor he can be, given the right material. His handsome face betrays his utter terror and anguish, biting his nails he is at once a bully, a murderer, and a child. It’s the performance of a lifetime.

When Ken receives the order to kill Ray, the triptych is complete, Fiennes, his chilling eyes raises the action up to  – unpredictable, giving us one of the best endings/payoffs in a film of recent times.

In Bruges is a wonderful film, amazing acting all round, a beautiful looking film with a story of pathos and heart, extreme violence, and midgets.

Its also worth mentioning that McDonagh’s short film Six Shooter is one of the extras, and has some similar themes and stars but its worth investing in this disc just for this film. Also darkly comic its really packs a punch.

I used to live in Los Angeles and write about Rock bands. Now I live in wonderful Wales and write about films. I like video games (especially RDR2) and am also a painter...gratuitous plug: follow my art account on Instagram @artbytinar
July 2019 Entertainment Show Our “World Tour” has begun