Review: It Came From Outer Space 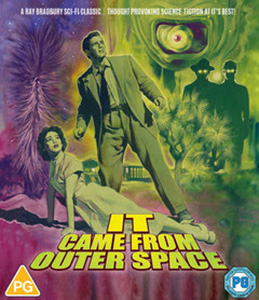 John Putnam (Richard Carlson) is a writer and amateur astronomer, who along with his girlfriend Ellen (Barbara Rush) witness a meteorite crash into the nearby deserted landscape.

Asking his friend Pete to fly them out there in his helicopter to investigate, John climbs down to the crash site alone and sees a partially hidden spacecraft with a strange creature inside it. Both are soon covered completely due to a landslide.

None of the townsfolk believe that it was a spacecraft that crash landed and think that it was only a meteor. However, more and more people begin to act out of character, and a strange alien entity is spotted roaming the roads.

Now you’re probably expecting me to continue along the lines of “then people started being killed and the human survivors had to battle the deadly alien”, but this is where It Came From Outer Space differs from the majority of 1950’s sci-fi monster movies, as it’s underlying message is presented in a far more subtle way, leaving the characters in the film and you as a viewer with questions to be asked about humanity.

Directed by Jack Arnold from a story by Ray Bradbury, this has quality from top to bottom, with even the usual 1950’s sci-fi movie hammy effects having a certain charm…especially the sparkly trail which the alien leaves behind as it moves, which led me to thinking that its alternative title could have been “The Glitter Shitter”…imagine that in 3D!? And yes, this also contains the 3D version too!

Accompanied by some very interesting special features, It Came From Outer Space is definitely a must buy for all 1950’s sci-fi movie fans like myself.

It Came From Outer Space is released 14th December 2020.