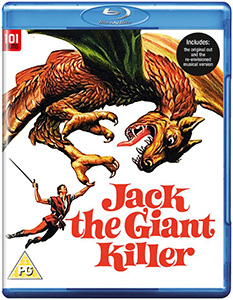 Released on Blu-ray for the first time in the UK, Jack the Giant Killer is family entertainment at its best…a swashbuckling adventure with stop-motion animation beasties that will have you cheering and booing in equal parts.

The evil Pendragon (BOOOO) plots to gain control of Cornwall by abducting the Princess.

Pendragon uses his evil spells to summon forth all manner of creatures (rendered in Harryhausen-esque stop-motion that are an absolute joy to watch) of which a giant abducts the Princess from the castle.

However, a peasant farmer (the titular Jack) battles the giant and saves the Princess (HURRAH!).

This is just the beginning though of a journey Jack must take to be done with Pendragon once and for all, in an adventure story that keeps throwing thrill after huge-smile-inducing thrill at you during its entire 94 minute running time.

Jack the Giant Killer is a visual treat on this Blu-ray release from 101 Films. The vivid colours of the sumptuous clothing worn by the aristocracy at the castle, is a kaleidoscope of beautiful primary colours, which make it look as though it was made yesterday.

The visual effects of course highlight that this was indeed not made yesterday, but the stop-motion animation has a timeless charm that adds to the adventure.

You get double for your money with this release too, as it also has the re-envisioned musical version of the film too, of which the fascinating and informative tale of its genesis is just a part of the great commentary track by Alan Bryce on the original cut.

Treat yourselves to a timeless adventure for all the family…just be prepared to hide behind the couch when the witches appear!