I am a dolphin on a mission.
Heading to the surface I pop my head out of the water and look at the man stood on the edge of the ocean.

The man bends down and replies:

‘Clicky squeaaak click squeak squeak!‘ (‘My name is Christopher not Flipper, listen to me the water levels are rising, you need to stop polluting the earth’)

‘What’s that Flipper? Bobby has his foot stuck in a sewage pipe?‘

‘Okay Flipper, I’ll get my boat! We need to save Bobby!‘ The man runs off to get his boat for no reason that I have mentioned.

‘Squeeeek, click click squeaky click squeak‘ (‘I have tried for years to get the message to you, you bloody idiot. The sea levels are rising and you are all doomed. You will all die. All you are bothered about is people with body parts stuck in pipes and people smuggling things in boats’)

I give in and return to the ocean, I have failed my mission and now it looks like all of humanity will drown. Perhaps in the future, when the whole world is a sea, other dolphins will tell the tale of Christopher, the dolphin who tried to save the world.

Then again perhaps not.

As a side note Sea Legacy and The Ocean Foundation acted as consultants and partners on Jupiter and Mars and that a portion of the proceeds from the sales will go towards ocean preservation. 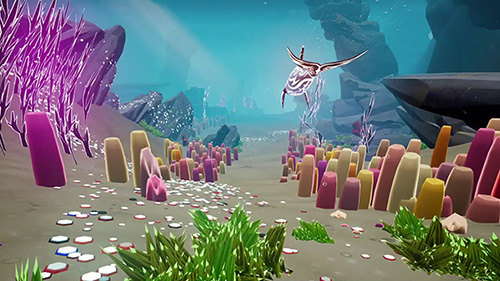 Well then, here we are with Jupiter and Mars on PS4 and PSVR. A game that can be played with or without VR but for the purpose of this it was played in VR because y’know VR can make even the mundane better, most of the time…..

In the not too distant future us humans have buggered thing up quite badly. So badly in fact that the earth is now pretty much water with all of our cities and landmarks now nothing more than ornaments in a giant bath. Amongst the surviving aquatic life, humans are known as landwalkers and the problem is that landwalkers have abandoned Earth as it can know longer support landwalker lifestyle, the wi-fi signal is terrible. Unfortunately even though we have gone, our legacy is still causing issues under the ocean surface with pollution and still working machines causing harm to the remaining sea life.

With the help of the elder whales you are tasked as the titular Jupiter and Mars, two dolphins, to help clean the sea of the harmful landwalker remnants and allow life to continue in peace.

Gameplay wise what do we have then? The simple answer is not as much as I would like. You play the game through the eyes Jupiter, the blue tinged dolphin, with your red tinged companion and battering ram Mars almost constantly by your side waiting for your commands.

As Jupiter you have some sills at your command. You can swim (duh) use echo location to highlight things of interest in the environments, use a sonar pulse to budge dangerous jellyfish and annoy clams enough to open up and reveal their contents.

You are also the boss of our dynamic dolphin duo, so you also get to tell Mars what to ram into and break, be it grates, rocks or machinery you tell Mars to thwack it and he will. Jupiter is the Brains and Mars is the Muscle. Its best to think of Mars as a free roaming gun in a sedate underwater shooter.

You will navigate each surprisingly open level looking for critters to help and free from various man made problems, such as fishing nets. Doing so will either give you a collectable or work towards a set number of things required to open up another part of the level. For example finding 5 stingrays will help you get past a puzzle involving getting power to a gate allowing it to open and for your adventure to continue.

Soon enough in each level you will start to encounter man made machines that send pulses through the environment that knock you back. These machines can be shut down by getting Mars within distance of their generators so he can give them the old dolphin headbutt to break them.

Usually to get close enough you have to swim behind an object that will guard you from the pulses the machines send out and then use a bit of timing to get to the next conveniently placed piece of cover.

At the end of each level you will find a complex that looks like a space station, inside here you can permanently shut things down, restoring peace to that area.

There are the occasional unique puzzle or set piece here and there but in general every level is swimming around finding X number of things to progress, using Mars to hit things you highlight to either collect X number of X things hidden throughout the level. This is repeated again and again and I will be honest it did not hold my attention at all from a gameplay point of view.

Occasionally you will get to power up Jupiter gaining the abilities to swim against a strong current or swimming deeper but again these mainly amount in giving you the ability to go back to previous levels and collect more hidden things in areas you could previously not travel to.

It’s fine as a gameplay experience but that is the problem, it’s just fine and gets dull.

So if the gameplay is a case of beige trousers what about the graphics and sound?

From a VR perspective it is also disappointing. The levels themselves are pleasingly vast. Control of Jupiter is uncomplicated and smooth, point your head and press swim, and there are some good VR comfort options available to those who may get queasy with 360 degree movement. 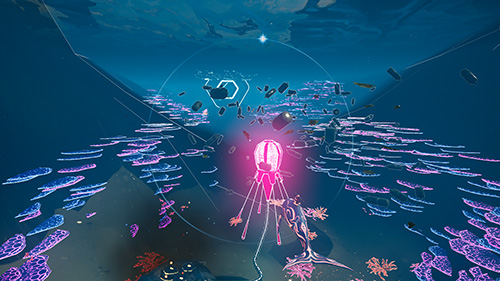 However like a majority of the ocean the levels are very empty and somewhat lifeless. This is not helped by the flat and stylised visuals that hark back to something akin to Rez but have none of the style or flair of Rez which means what we have looks very simple and a little…well dull. Yes the colours have a luminous undertone that you would expect of bio luminescence, and on a flat screen look a lot better but due to the resolution of PSVR everything that is not pretty close to the player can become a bit of a muddled mess.
What should be a beautiful underwater firework display of colour becomes staring through the hazy eyes of a drunkard as he stumbles through the poorly lit sticky dance floor of a less than reputable local pub disco.
So if you want clarity play it flat, but you lose the immersion . If you want the immersion, the size of the areas you can explore is impressive sometimes, but with uglier visuals then play in VR.

It’s not a great choice to have to make if I am honest.

Music wise what we have here is good enough. For me it is not amazing but it is not awful. Some areas are better than others. This is not a rhythm action game even if it looks like it could be.

When all is said and done there is not much to Jupiter and Mars which is a shame. It wears its eco message on its sleeve. For me it was a little too much, by all means have a good message but back it up with something memorable and, since this is a game, something fun to play.

And that was the crux of the matter for me, I didn’t really enjoy my time with Jupiter and Mars. It left me cold and somewhat bored, I wished there was more to the game, more variety, better gameplay, clearer graphics and well just more.. then perhaps the game would have lived up to what it was trying to tell us.

Pub Menu Rating: Smashed Avocado and Quinoa Salad
Review by Adam.
If you want to buy anything reviewed on our site (or anything at all!), then please use the Amazon link provided and help support us with our website and podcast. Thank you.

As I journey through my own existence gaining wrinkles and bad joints, I still love video games, films and music. I've been podcasting for a few years and now here I am writing things. Who would have thunk it? Thanks for reading and check out all our reviews and shows on the site. Treat yourself.
S.O.S. – They Call Her…Cleopatra Wong H.E.A.T. release ‘Live at Sweden Rock Festival’on July 26th