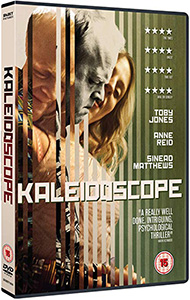 Carl (Toby Jones) lives alone high up in a tower block in London. As the story progresses we get hints that he was in prison for some crime that may, or may not, be connected to sexual violence.

He works in what seems to be a hospital gardens, but again, perhaps not.

He’s lonely and arranges online dates, or are they appointments with prostitutes? He has visions of a dead girl in his bathroom, and then his mother (Anne Reid) appears with a suitcase.

This is a fractured film, abstract in its narrative and very unsettling. Twice I asked the person sitting with me watching it if the noise was coming from the film, or the speaker was buzzing. It was the film.

It’s a grimy, confusing vision, there are no hints at incest between mother and son, it’s right there in your face (“touch me Carl”) that did make me recoil, mainly because Anne Reid is so convincing as a manipulative, overpowering presence. Ripping a plaster off her cut leg to make Carl dab it, to make him come close enough to sniff it. YUCH.

What horror though? Is any if it real? And more importantly, do I care enough to watch the rest of the film?

The acting in this, is of course amazing. Reid, Jones and Sinead Matthews as Abby, the dead (?) girl/prostitute/robber, and the actual story, is basically all over the place. Just when you think you get it, you don’t, and despite it beginning as a noirish descent into madness, I was soon having that… ‘this is another 2 hours of my life I won’t get back’ thought, and by the end I was rather pissed off.

I didn’t expect a neat end with a bow, but it galloped along and there was no real conclusion other than ‘well what was the point in that’?

Great if you want to see some amazing actors, but the story leaves a lot of be desired.

Review by Tina from a streaming link kindly supplied by Aim Publicity.

I used to live in Los Angeles and write about Rock bands. Now I live in wonderful Wales and write about films. I like video games (especially RDR2) and am also a painter...gratuitous plug: follow my art account on Instagram @artbytinar
September 2019 Decade of Decadence Live Event: Alcatrazz, The Tivoli, September 21st, 2019