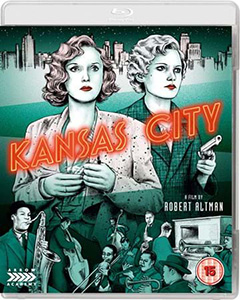 In early 30’s Kansas City, Johnny O’Hara (Dermot Mulroney) rubs burnt cork on his face, and aided by a taxi driver robs an out of town gambler of his money.

Local black gambling boss, Seldom Seen (Harry Belafonte) is not happy and holds Johnny hostage while he decides how to kill him. Johnny’s wife Blondie (Jennifer Jason Leigh) decides that kidnapping local politician’s wife Carolyn Stilton (Miranda Richardson) will force her husband to intervene and get Johnny back to her unscathed.

The story is simple, it is literally Jennifer Jason Leigh talking like a female James Cagney in White Heat, all “Noo Yawk” and clipped snarls through fake crooked yellow teeth. Miranda Richardson swans around being posh and doped up on Laudanum, Dermot Mulroney has about 5 lines and Harry Belafonte spouts one endless dialogue out to whoever is in the room, unfortunately Belafonte just doesn’t make a believable killer.

Most of the action is centred around the Hey Hey Club, where a never ending concert of (rather fabulous) Jazz musicians play (torture for Dave) as a ‘divide’ between scenes.

Directed by the great Robert Altman, Kansas City one of his lesser known films (I’d never seen it before) and to be brutally honest, not one of his best. While JJL’s performance is good, it’s also grating, and her yellow teeth are very distracting.

The ending was expected and not the shock I think the director planned. All in all it’s a nice looking film, low on substance and around the two-thirds mark you wonder if you can be arsed watching till the end despite some side stories that never really go anywhere (a young pregnant girl, a boy with a sax) as nothing seems to happen.

I used to live in Los Angeles and write about Rock bands. Now I live in wonderful Wales and write about films. I like video games (especially RDR2) and am also a painter...gratuitous plug: follow my art account on Instagram @artbytinar
The Hunt – International Trailer released Temperance reveals new single & official video “Start Another Round”

Thursday evening @DastardlyJabby & @ApeMutterings are recording a Spotlight Reflection show about Class of 1999. Any comments/questions for them please? They'll read them out/answer them on the show. #podcast pic.twitter.com/bvkDuHLrtX

RT @Ray_Harryhausen ANNOUNCEMENT FROM THE TRUSTEES REGARDING 'RAY HARRYHAUSEN: TITAN OF CINEMA' EXHIBITION- Our centenary exhibition at the @NatGalleriesSco has been postponed- we hope to share the new opening date soon. Read a statement from the trustees: rayharryhausen.com/ray-harryh… #Harryhausen100 pic.twitter.com/A2EVxtV57O