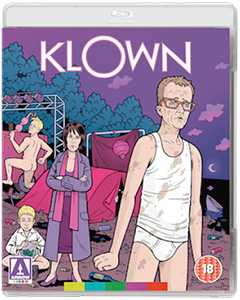 Developed from the successful Danish television series of the same name (which I admit that I’ve no prior knowledge of at all), Klown follows the hapless Frank (Frank Hvam) as he tries to prove to his pregnant girlfriend that he can be a reliable Father when their child is born. This leads to a hilarious road trip where Frank kidnaps his girlfriends 12 year old nephew Bo (Marcus Jess Peterson) and goes canoeing and camping with Frank’s friend Casper (Casper Christensen). Casper however is not best pleased at the addition of Bo to their trip, which he has called their ‘Tour de Pussy’, and vows to make this the sexual adventure of a lifetime despite being hindered by a 12 year old boy. What follows is a series of events that will in equal part have you cringing with your head in your hands, and also laughing so hard that you may just wee yourself a little…or is that just my age showing now?

Klown drops its pants in front of you and slaps you around the face with its incredibly small penis (that sentence will make MUCH more sense when you’ve watched the movie) until you give in to its absurd situations and embrace what is playing out before you like a crazy Uncle who has no filter on controlling what he says and does.

Filmed in a ‘fly on the wall’ style, Klown eschews any elaborate cinematography in favour of a style that draws you into the events like an unwitting Peeping Tom. This works perfectly as you often find yourself wanting to shout advice to the characters on screen as if you were really there.

Not au fait with Danish humour, I have to admit that it took me 10 minutes or so to acclimatise to the deadpan delivery of the dialogue and characters responses to their situations. Once this clicked with me though, I appreciated the humour on a whole new level and was smiling throughout the entire running time, interspersed by regular huge bouts of laughter.

Frank constantly tries way too hard to impress Bo and prove his worth as a potential Dad, leading them into situations that you know in advance will not go well. Add to this a sex obsessed Casper who insists that his ‘Tour de Pussy’ is far more important than family, and you have a situation where the friends relationship is being pulled in various directions at once.

Klown is not a movie to watch if you are easily offended or a proponent of political correctness. I however am neither and absolutely loved every minute of its debauched and cringe inducing running time. The final reveal in the end scene you can see coming in advance and had me literally slipping lower into the couch as the inevitable payoff approached. When it did I found myself laughing like crazy yet still feeling a little bad for doing so. If you thought that Ricky Gervais had nailed the “I know I shouldn’t really be laughing at whats happening, but I can’t help myself” style of humour, then be prepared for Klown to take you to a whole new level…and you’ll love it.

I am now obsessed with watching the TV series from which this movie was based and am also delirious to find that there was a sequel made in 2015 called Klown Forever…PLEASE release this too Arrow!

As always with releases from Arrow Films, Klown is accompanied by some fantastic special features that are both entertaining and informative. This is a movie that I will be revisiting on many occasions.

Review by Dave (host of 60 Minutes With) from a disc kindly supplied by Fetch Publicity from Arrow Films.