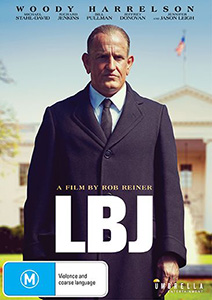 I had some kind of preconceived idea of how I was going to start this review as soon as I heard the word “biopic”. In a world filled with Bohemian Rhapsodies, La Vie En Roses and so on it’s understandable that the word should come as so shudder inducing. Often masturbatory bore fests, it’s difficult to get excited about these historic epics anymore. I was expecting to give the tired bottom line of “shit film, good lead” but honestly, save for a few strange missteps, LBJ did not turn out to be the film I expected to see.

The film takes place over the vice presidency and the eventual presidency of Johnson following Kennedy’s death. Starting as a typical biopic, foreshadowing the inevitable assassination of the leader. It isn’t long however before the film takes a quick 180 turn into, strangely enough comedy. Though jarring at first, sense of humour is oddly the films most endearing quality. Jokes, though crude and offensive, are quick witted and in service of the narrative and Johnson’s character. There’s almost an air of The Thick of It or West Wing. I’m no American history buff and can’t vouch for the historic accuracy the film may or may not display but if any truths were dropped in favour of such entertaining dialogue then so be it.

Woody Harrelson as the titular LBJ is more of a comedic caricature than a serious actor in the midst of career defining character study. It’s more of a good impression than anything else. Not to say he’s bad or anything, with what he’s been given he’s doing an exceedingly good job. It’s the films confusion in establishing a tone that is the real hinderance to his performance. Trying to deliver a heart-warming speech about his dream to be a progressive president who wishes pioneer Kennedy’s historic civil rights bill after making satirical and crude jokes against the idea just didn’t sit well. I understand that this was probably done to portray Johnson as a diplomatic shark as sorts, as he plays all sides for the good of his own political interests but tonally it just doesn’t work. The sappy soundtrack clashes with the fast paced political satire and the second half just drops the strong comedy entirely. Pair that with Harrelson having to act through what is seemingly make-up from Little Britain and you have yourself a serious hinderance. Oh and the less said about Kennedy the better.

In the end, LBJ proved to be a lot better than expected. Somewhat effective, it has good ideas only to be held back by the usual sappy trappings of the standard biopic. It also proves to be a difficult film to recommend in a traditional sense. I’m not sure how historically accurate it is so the recommendation to history buffs seems pointless. It doesn’t explore its comedic side long enough, so I can’t recommend it as a comedy. The absolute best I can do I guess is recommend it on the grounds of Woody Harrelson fighting for civil rights in a fat suit.

That’s actually not a terrible sell come to think of it.

Review by Joel, from a disc kindly supplied by Umbrella Entertainment.

I like to think I'm a critic out of spite for all the criticism I receive in film school. I enjoy consuming all things entertainment and art but I enjoy pretending I could do any better even more. Jokes aside, I absolutely adore creating and interacting with all art and entertainment. Always happy to air my obnoxious opinions on games, films and music and I can only hope you also get some kind of sick kick out of reading them.
ClintCast: Intro Show Manchester Film Festival 2019