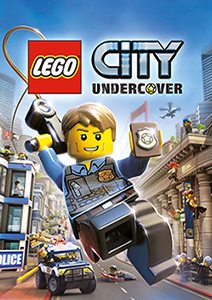 Four years after its original release on the WiiU, Lego City Undercover finally makes its way to PS4, Xbox One, PC and Nintendo Switch. The WiiU gamepad was maligned by many, and even Nintendo barely used its features towards the end of the consoles life cycle. However, there are some examples where the gamepad was not only fun to use but, also integral to the game. ZombiU (also initially a WiiU exclusive now available on other consoles) and Lego City Undercover were great examples of how the gamepad could enhance the game you were playing with truly innovative ideas. So, the big question for me was; is one of the best WiiU exclusive games still fun, despite missing a key component that enhanced the original gameplay?

I wrote about my history with Lego games last year when I reviewed the excellent Lego Star Wars: The Force Awakens. I’ve always enjoyed the Lego games but, I guess I appreciate them a lot more since I became a father. The style, humour and simple, yet addictive gameplay, is the perfect introduction for kids to get into gaming.

The best way to describe Lego City Undercover is to imagine a Grand Theft Auto style open world with the charm, playfulness and humour of Lego. There definitely isn’t any excessive use of the “N” word or opportunities to murder prostitutes in Lego City Undercover!

You play as likeable undercover cop Chase McCain, who is hot on the heels of the nefarious Rex Fury. During your quest you drive a huge number of air, sea and land vehicles to get around Lego City. The handling of the vehicles is ok but let’s be honest, it doesn’t necessarily need to be extremely accurate, as you are encouraged to smash into things to collect studs. Some cars have a handy turbo boost and even if your vehicle does get damaged, jumping from car to car is easily achieved with the press of a button.

It is important when you have a younger audience that the game is as accessible as possible, and I was especially impressed with Lego City Undercover. An example of this is rather than constantly having to refer to a map to plan your next destination, waypoints are usually already marked for your convenience.

As you are an undercover cop there are different costumes to help you succeed in your quest. Each of these outfits has a special ability, for example, the burglar costume means you can crack safes and use your crowbar to break into previously inaccessible areas. The farmer outfit lets you grow plants to help you climb or fly by pulling a chicken from your hat! No, I am not joking! Switching between outfits is very easy and can be achieved with a simple tap of the bumpers on the controller.

As well as collecting studs as you break apart levels, you now also collect super bricks. These are used to build structures such as a carport, which gives you access to different vehicles. Driving around Lego City is fun and there is always something to see and do, even stopping at a local park to have a go on the swings and slide.

Lego City Undercover introduces a decent, if simple, fighting system where you can dodge enemy attacks by tapping a button on the controller just before you are hit. In a refreshing change, you arrest people rather than killing them, and as with the other LEGO games there is no real penalty for losing your energy.

As great as Lego City Undercover was on the WiiU, one of the main issues with the game were the long loading times. I’m happy to say that these have been resolved and are no longer a problem. My other concerns about the lack of the WiiU gamepad were also quashed and the changes are handled quite well. Although playing on the Xbox One didn’t feel as unique as playing on the WiiU, I guess if you haven’t played with the WiiU gamepad you wont really miss it.

Just to give you an idea of how the WiiU gamepad worked, you would use it to communicate with your headquarters, scan for criminals or listen in on conversations. All of this now appears directly on the your TV. Although it isn’t quite as interactive as the WiiU, it definitely works well.

The biggest compliment I can give to Lego City Undercover is that you can’t help but smile whilst you are playing it. There are so many TV and movie references that I absolutely loved spotting, and I’m sure people of my age will love them as well. Without giving too many away I adored Starsky and Hutch (or should I say Studski and Clutch) and the Arnold Schwarzenegger impersonator was hilarious.

Lego City Undercover is huge and extremely good value for money. Despite finishing the main story, I had incredibly only completed 23% of what is available to do in the game. Lego City Undercover can be played in co-op mode and there is plenty of fun to be had for kids, but I’m sure parents will get a huge kick out of it as well. Highly recommended!

I love video games and movies as much as I love my children. However, I'd rather face off against the worst end of level boss, and watch the scariest horror movie than visit another soft play! Thanks for taking the time to visit the website and read this review. Please send any complaints to Dave and any money to me!
Soundcheck: The Warriors Soundtrack Soundcheck: Terrorvision – How to Make Friends and Influence People