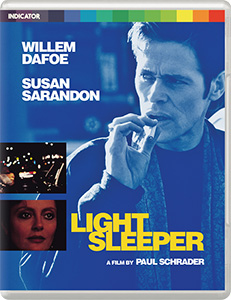 Set against the dark rain soaked streets of a New York city covered in litter due to a sanitation strike, director Paul Schrader uses neon lighting and shadows (as so effectively utilised in American Gigalo) to create the backdrop to the life of John LeTour (Willem Dafoe); a reformed addict who is dealing drugs for his bosses Ann (Susan Sarandon) and Robert (David Clennon).

LeTour is still affected by the break-up from his “wife” (their marriage wasn’t legally valid) Marianne (Dana Delany), and when their paths inadvertently cross once again, past misdeeds come back to haunt them with devastating consequences.

The score by Michael Been is prominent throughout the whole of Light Sleeper, as much of the running time is spent following the characters in self introspection, specifically LeTour, who, thanks to the performance of Willem Dafoe, exudes palpable emotion shifts with the smallest changes of facial expressions.

Sarandan’s character is authoritative and confident, yet through a series of events beyond her control eventually shows her vulnerability to LeTour, climaxing in a scene, that while always inevitable, was completely forged through the events that preceded it.

Light Sleeper is a story of redemption, of longing, the fear of losing control, with the odd moment of violence being mere punctuation points in a deeper narrative about the human soul, and encapsulates the saying of “You can’t understand someone until you’ve walked a mile in their shoes.”

It’s slow paced narrative may not be to everyones taste, but the incremental changes to LeTour’s psyche can not be rushed, with each moment that passes changing his character irrevocably.

Take the time to walk a mile in his shoes, it is a journey you may well enjoy taking.

This UK blu-ray premiere from Powerhouse Films features some very interesting special features, including a 2002 commentary by director Paul Schrader that answers many of the questions you may well have thought while watching the feature.