Review: Lu Over The Wall 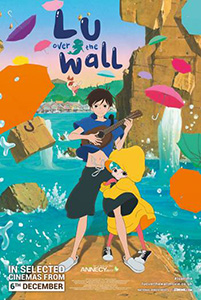 Having opened in its native Japan back in May under the title Yoake tsugeru Rû no uta, this second feature from animation house Science Saru and the fantastical imagination of blossoming Ping Pong auteur Masaaki Yuasa won Cristal for Best Feature Film at the Annecy International Aminated Film Festival. It is receiving a subtitled theatrical bow for Western Audiences this month.

Despite more than a passing resemblance to 2008 Studio Ghibli production Ponyo (itself a retelling of The Little Mermaid), Lu Over the Wall employs a flatter and more rudimentary drawing style, purportedly completely compiled in Flash. The characters move in a more hectic, hyperbolic and angular fashion which does help convey emotion, if not photo-realism, against the more textured and detailed backdrops.

The story concerns gloomy teen Kai (Shôta Shimoda) who has moved in with his grandparents after his parent’s divorce. Disinterested in middle school and finding his only joy in making catchy laptop-aided musical compositions, Kai is invited to join a band comprising of classmates Kuniko (Soma Saito) and Yuuho (Minako Kotobuki), who practise in the disused theme park Mermaid Island on the outskirts of their declining fishing village of Hinashi.

Initially reluctant, Kai finds a new verve for life when their rehearsals attract the attention of bubbly, all-singing, all-dancing mermaid Lu (Kanon Tani). Enthused with a rich sense of humour, the film is at its sweetest when Kai and Lu are bonding in quieter moments while wandering the empty streets at night. However, the second half sees a dramatic change in tone as the desperate townsfolk seek to take advantage of their magical fish-tailed starlet, bringing on the rage of Lu’s giant, shark-shaped father, who unleashes his destructive forces on the Hinashi community.

With bright and distinctive (if rigid) animation, colourful characters and a foot-tapping soundtrack, Lu Over the Wall is an entertaining production with a worthy message about being true to yourself, living your life and looking after the planet. Its heart is in the right place and some cutesy gags will raise a laugh with all ages (look out for the mer-dogs!), even if it is a little on the lengthy side (107 minutes) and it starts stronger and more soulful than its action-heavy finale.

Review by Chris Howard from an advance cinema screening courtesy of Fetch Publicity.