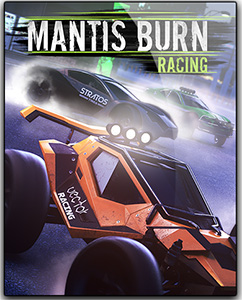 Voofoo Studios have long been a favourite video game developer of mine, and having previously bought Hustle Kings, Pure Chess, Pure Pool, Pure Hold’em and Backgammon Blitz, I of course bought Mantis Burn Racing on day of release.

For those of you who may not be familiar with Mantis Burn Racing, it is an overhead racer where mastering a good power slide, taking advantage of numerous shortcuts and a canny use of your ever increasing upgrades is key to success. With an eclectic choice of ways to play as you work your way through the career mode, it is not just a case of ‘first past the post wins’, and with 3 bonus objectives to try and attain in each race, it has bucketloads of replay value in both single player and multi-player. It is definitely one of those ‘just one more go‘ games and before you know it hours have passed as you work your way through the huge branching career path and feverishly sweat over what upgrades to attach to your different vehicles across varying weight classes. If you haven’t already bought Mantis Burn Racing, then I can thoroughly recommend it.

Voofoo studios are great at supporting their games and previous DLC for Mantis Burn Racing has been fantastic. The snowbound pack added icy terrain to the already available tracks and made those corners that you once effortlessly did a power slide around now a life or death decision as to whether you should ease back on the throttle to be safe, or keep gunning it in the hope that you can keep control and not go skidding off a cliff edge. While the Elite Class DLC added ‘hover-vehicles’ which are less affected by the tracks terrain and once again have you making on the fly adjustments to racing tracks that you previously knew like the back of your hand.

The new Battle Cars DLC not only adds more branching career content for you to work your way through, but it also drastically affects the way that you play the game. Adding armour and weapons to the vehicles makes you think much more tactically as to how you approach each race. Racing out in front early means that you are a prime target for the trigger happy pack behind you, though the weapons are not triggered immediately, with the forward facing machine gun activated when passing a check point and the rear facing mines not available until the first lap has been completed. The guns have unlimited ammunition, but overheat fairly quickly, which means that you have to judge the prime opportunities for when to start shooting at those in front of you. Short, sharp bursts is the way I usually do it.

Mines are limited to 3 per lap, and once again tactics come into play as to when and where to use them. A sneaky drop point is always just in front of one of the repair icons on the track which get you back up to full health after taking any damage. Also, quickly dropping one behind you into the path of someone who is concentrating on lighting your ass up with a barrage of bullets, always raises a smile.

Battle Cars also adds 3 new vehicles to play with and upgrade; the Mauler heavy truck, the mid-range Lancer, and the lightweight but fast Stinger. There are also 3 new race modes; King Of The Track has you starting in front of everyone and gaining points for every checkpoint you pass before ultimately being destroyed and someone else taking your position and trying to score more points before the race ends. Accumulator Rumble plays the same as the original Accumular mode, but this time gives you bonus points for blowing up other racers. Finally, Survival is exactly how it sounds as it is a case of ‘last racer alive’ wins.

All of the new modes and career path give extra opportunities to add even more gears for you to upgrade with. The constant decisions of whether to add more grunt to the engine, get better suspension, have a longer boost, and ALL the other upgrade options keep you revisiting your garage to have a tinker and see if you can do just that bit better next time around.

The Battle Cars DLC can get frustrating at times when you’re constantly being blown up and racing takes a back seat to how to implement your weapons on each course rather than nimbly race around them leaving tyre mars behind you as you slide around the corners. Though for the content that VooFoo have provided in this DLC pack and at the bargain price point of £1.99, that is just a very small niggle.

Lock and load those weapons and jump back into the world of Mantis Burn Racing…I’ll see you online with my finger on the trigger.

Review by Dave (host of 60 Minutes with) from a PS4 DLC code kindly supplied by VooFoo Studios.