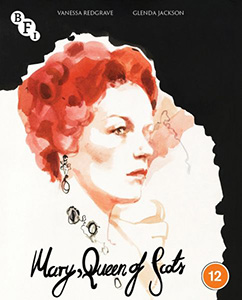 Directed by Charles Jarrot a year after his huge success with Anne of a Thousand Days, and written by John Hale who was responsible for the first episode of the 1971 BBC series Elizabeth R (also starring Glenda Jackson who reprises her role as Elizabeth in this film), the time was ripe for historical-costume films and boasting a cast of the best of British actors, Mary Queen of Scots is like every other ‘Historical’ film, lovely to look at, but you just wish they told the REAL story.

In its favour this does more or less follow the time line of Mary, but unfortunately also tells huge porkies about what really happened.

From Mary and Elizabeth meeting twice (they never met), to where her baby was born (in Edinburgh castle not in Lord Rothwell’s house), it’s all done for dramatic effect, but again, as with all historical films, the TRUE story is so much more enthralling, WHY don’t they just tell that story!  Even the new 2018 MQOS starring Saorise Ronan is full of untruths.

Nigel Davenport, Patrick MacGoohan, Trevor Howard and Ian holm give fine performances, Glenda Jackson is the main star of this and gives a wonderful performance as Elizabeth, raging and stomping around while Vanessa is rather wet as Mary, prone to fainting and screaming.

Despite all this, Mary is a very entertaining film, the costumes are lovely, the scenery beautiful and even her death is swift (in fact it took 3 chops to get her head off).

I used to live in Los Angeles and write about Rock bands. Now I live in wonderful Wales and write about films. I like video games (especially RDR2) and am also a painter...gratuitous plug: follow my art account on Instagram @artbytinar
Brand new 4K restoration of RAW DEAL out 19th September from STUDIOCANAL Soundcheck ’em out: Before the Storm, Restless Spirits, Sunstorm