Max Reload and the Nether Blasters (2020) 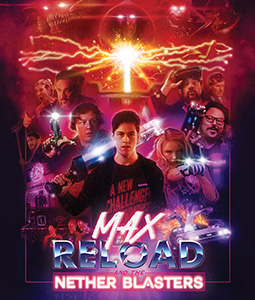 Max Jenkins (Tom Plumley) is a young man obsessed with video games, so much so that he even works at a gaming store, as well as spending the rest of his time playing online games with his 2 best friends Liz (Hassie Harrison) and Reggie (Joey Morgan).

Not known for being much of a team player while playing online as his alter ego ‘Max Reload’, his gaming and personal skills are put to the test when a “lost” copy of the ‘Nether Game’ series appears at his store and unleashes an evil force from the Colecovision console it is put into.

Nether Game programmer Eugene Wylder (Greg Grunberg) appears at the store and offers to help put evil back where it came before the world is doomed, but he comes with his own personal baggage too, which may or may not hinder their quest.

The question is; will they be able to defeat the forces of evil, or will it be “Game Over” for humanity?

Max Reload and the Nether Blasters is a hell of a lot of fun, and as well as taking me on a highly enjoyable ride throughout its 100 minute running time, it also tickled a lot of my gaming nostalgia buttons too…I had a Colecovision console for a start (which I bought at the now sadly departed Woolworths). There are also references to the infamous Xbox 360 “red rings of death”, and a “Leeroy Jenkins” nod that had me laughing too.

You don’t have to be a long time gamer though to enjoy Max Reload and his pals kicking evil ass, as there is a tongue in cheek slice of silly humour running all the way through it that everyone can enjoy.

Throw in great appearances by Martin Kove, Kevin Smith, Lin Shaye and more, and you have a wild and kinetic movie that has me waiting patiently to see what writer/director combo Scott Conditt and Jeremy Tremp come up with next.

You can watch Max Reload at the upcoming Grimmfest May Madness event.

Review by Dave from a press screener kindly supplied by Grimmfest.