Review: Memory – The Origins of Alien 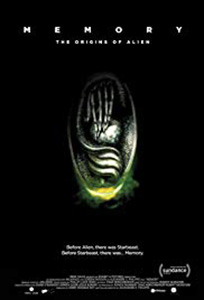 Memory: The Origins of Alien is the latest documentary written and directed by Alexandre O. Philippe, famous for ‘78/52’ the documentary which fetishistically dissected Hitchcock’s shower scene so eloquently. He now turns his gaze onto Ridley Scott’s 1979 classic, Alien.

Beginning with 3 furies (witches with the aliens teeth), he gives us a real sense of ‘the other’ that stems back through time, and then takes us back to all the influences, in depth, on the writer of Alien: Dan O’Bannon.

Raised in a hick town Missouri, he helped his dad who owned a curio shop called ‘Odd Acres’ (they faked a UFO landing when he was a kid), and he was great at drawing. He read sci-fi and loved comics and giant-bug horror films of the ’50s.

His wife gives a real insight into O’Bannon’s childhood, and more or less lists the antecedents of Alien from all the things he loved, from At the Mountains of Madness to The Thing.

He then moves on to H.R. Giger’s involvement, and how after O’Bannon loved Giger’s work, the executives at 20th Century Fox looked at Giger’s drawings and refused the plan to use him as a consultant, as they thought he was ‘sick’.

Veronica Cartwright and Tom Skerrit then take us through several scenes of the film, concentrating on the genesis and implementation of the chest bursting scene. How it was created,how the baby alien was directly inspired by the seminal painting of Francis Bacon’s the right-hand panel of ‘Three Studies for Figures at the Base of a Crucifixion’. Painted in 1944 this is a triptych that seems to be joined at the hip to Alien, almost as if Bacon knew.

In truth I thought Scott and Giger were solely responsible for the story, feel and look of the film, in fact those men were the flesh and O’Bannon was the back bone. He was the inventor.

This is quite a special documentary, rare in its depth and understanding of this iconic film, and perhaps most importantly, the beauty of it is its accessibility.

‘Memory’ completely captures the essence of the film, it is almost dreamlike and explores themes that make perfect sense, but have never occurred to me before. It’s not academic, yet is an essential and vital piece of movie scholarship.  Like a living breathing A ++++++ essay that is as entertaining as it is informative.

I used to live in Los Angeles and write about Rock bands. Now I live in wonderful Wales and write about films. I like video games (especially RDR2) and am also a painter...gratuitous plug: follow my art account on Instagram @artbytinar
Monopoly Events Presents ‘For the Love of Horror’ 2019 Joe Bonamassa Announces New Album ‘Live At The Sydney Opera House’