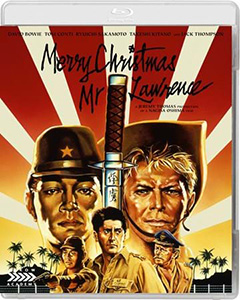 Merry Christmas Mr. Lawrence is based on  Laurens van der Post’s trilogy of books that detail his experiences as a Japanese prisoner war in World War II and was the first English language film by Japanese Auteur Nagisa Oshima.

Based in a Japanese P.O.W. camp in 1942, it tells the central story of Major Jack Celliers (David Bowie); a rebellious South African British officer with a guilty secret from his youth, Captain Yonoi (Ryuichi Sakamoto, who also wrote the incredible soundtrack for this film), Colonel John Lawrence (Tom Conti); a British officer who has lived in Japan and speaks Japanese fluently, and brutal Sergeant Hara (Takeshi Kitano), with whom Lawrence develops an unlikely and complicated friendship.

The story centers on the guilt Celliers and Yonoi are haunted by. Namely, shame for past transgressions, but this is portrayed in a homoerotic way between the two men. Which probably has more to do with the 2 actors used and the time it was made than the actual story.

Bowie is really good in this, three years before he’d proved his acting chops by playing the Elephant Man on Broadway. Sakamoto is also surprisingly good in his part despite wearing “new romantic” makeup. It’s such a shame the director wanted him made up like this (his blusher is similar to Grace Jones 1983) and is so distracting and is about the only thing that ‘dates’ the film.

The outstanding thing about this film is the STORY. And even now 80 years after Van Der post really experienced this, and 40 years after the film being made, the central message of the futility of war hasn’t aged one bit.

This is one of those films that if you haven’t already seen it you should, and if you think it’s going to be one of those weird art house films, well you’re wrong there too. It has a surreal quality to it, but is a straightforward story, told with heart. It’s also brutal with several beheadings, rape, and a lot of violence.

It’s been a long time since I’ve seen this film and had forgotten just how touching it is, and when Sakamoto’s amazing theme starts, you melt.

I used to live in Los Angeles and write about Rock bands. Now I live in wonderful Wales and write about films. I like video games (especially RDR2) and am also a painter...gratuitous plug: follow my art account on Instagram @artbytinar
Review: The Haggis Horns – Stand Up For Love Soundcheck Metallica (Part 1)