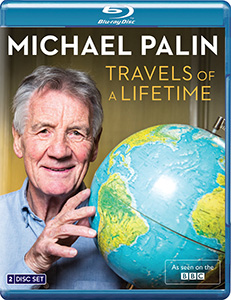 Michael Palin set a new standard for travel programmes when “Around the World in 80 Days” first aired in 1989, his affable and informal way of presenting endured him to millions of people, each of whom devoured every episode of his inaugural travels and all future expeditions, which included going from pole to pole, navigating the countries around the Pacific rim, and many more miles on top of those.

In this series Michael looks back at his travels, accompanied by clips from the TV shows, audio recordings he made on his journeys, reading excerpts from the famous diaries that he has always kept, and comments from a variety of celebrities about the impact Michael’s travel programmes have had on them.

For people who are already familiar with his travel programmes, these snippets of the shows and Michael’s reminiscing about them bring back wonderful memories, as well as embedding a strong urge to revisit them as soon as possible.

While for anyone who missed them the first time around, this is a great introduction to Michael’s travels which will surely entice you into wanting to watch his journeys in full.

Michael Palin is always a joy to watch, and seeing him look back on the travels which were such a large part of his life is an absolute pleasure, all with moments of retrospective insight which add an extra layer of enjoyment while viewing them again.

I would much rather have done without the celebrity comments and allocated more time to being with Michael, but it’s still interesting to hear how the programmes affected other people too.

Michael Palin – Travels of a Lifetime is definitely “comfort viewing”, and elicits smiles and laughter whether you’re new to his travels or not.

I’m off to rewatch all of his travelogues again now.

Review by Dave from discs kindly supplied by Dazzler Media via The Warrior Agency.