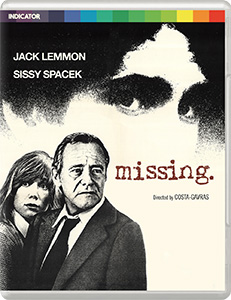 When his son goes missing during the Chilean coup, Ed Horman (Jack Lemmon) decides to abandon his useless government, a government Ed trusts to no end, and go to Chile in search of him himself. Joined by his son’s wife, Beth (Sissy Spacek), the two go on a politically charged journey driven on hope. As they uncover more and more about the mysterious circumstances about the disappearance, Ed may be inclined to put a different perspective on the government he reveres so much.

Missing, Directed by Costa-Gavras, is an absolutely excellent film and everything I wanted it to be and then some. Incredibly well realised, every aspect of this film is borderline perfect with no real room for improvement. The sets are peppered with as many dead civilians as heavily armed soldiers. Gunfire slips into the background of great dialogue between well-realised characters feeling as normal as the sound of cars. Expert camerawork showcases horrifying but grounded set-pieces of honest depictions of life in a warzone. A warzone where people still work, take leisure and interact like humans are expected to in such situations. A film is a sum of its parts and all of Missing’s parts work in tandem to create a truly fantastic experience.

To speak more of the set-pieces, I didn’t expect them to not only be so well executed but also imaginative. A scene in which Ed and Beth visit a mass grave is especially harrowing. As they walk through the walls of dead bodies looking for their relative every movement of the camera and edit is a thoroughly considered decision, ending on an especially horrific pan upwards that is sure to send shudders. There are also examples of the beautiful in these too. Scenes in which Beth finds herself begging for help surrounded by mannequins clad in wedding dresses. Or a pale horse running alongside the military. It’s as beautiful as it is haunting. As harrowing as it is grounded and is clearly the work of a filmmaker who knows exactly what they’re doing.

Lemmon and Spacek are incredible in their performances. The old fashioned, set-in-his-centre-right-ways Ed butts heads with idealist but courageous Beth in convincing ways only a chemistry between two actors like this could achieve. Watching them argue in hopes of achieving the same goal was entertaining to watch and seeing them slowly settle their differences with each other was made all the more endearing and heart-warming because of it. It’s an odd-couple relationship you’ve seen before, sure. But the characters are so grounded and relatable in their plight it feels like something the film does exponentially well and well worthy of being one of my many, many praises towards it.

Missing is a fantastic political drama and the sum of all its excellent parts. Beautiful, gripping and downright horrifying when it wants to be, the near ‘stranger in a strange land’ narrative presses all the buttons a film like this should press, then finds new buttons within its weirder but gorgeous sequences that are mirrored by very grounded and realistic story beats. I just can’t sing this film’s praises high enough.

Absolutely not to be missed.

You can buy Missing by clicking HERE. ALL money raised by purchasing from Amazon via our website is given back to our listeners and followers in upcoming competition prizes. The more people buy, the bigger our prizes.

Review by Joel from a disc kindly supplied by Powerhouse Films.

I like to think I'm a critic out of spite for all the criticism I receive in film school. I enjoy consuming all things entertainment and art but I enjoy pretending I could do any better even more. Jokes aside, I absolutely adore creating and interacting with all art and entertainment. Always happy to air my obnoxious opinions on games, films and music and I can only hope you also get some kind of sick kick out of reading them.
Review: Memoirs of an Invisible Man Review: The King