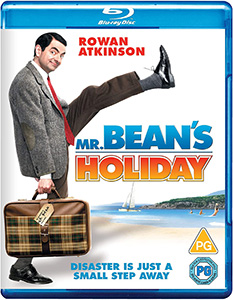 After winning a village raffle, Mr Bean finds himself in France and slowly making his way to Cannes. All he wants to do is step foot on the beach and take in the view, but as always with this disaster prone character the journey has many mishaps along the way, including being accused of kidnapping a Russian filmmakers son.

Rowan Atkinson’s portrayal of Mr Bean is an iconic part of UK TV history despite only 15 episodes of the TV series ever being produced. The silly vignettes showcased Atkinson’s sublime and seemingly effortless ability to convey physical humour in a way that connected to all viewers.

However, when stretched out to a 90 minute running time the humour can begin to wear a little thin. Bean’s travels through France and his inability to speak the language (apart from a misplaced confidence in using the word “gracias” at every opportunity) manage to keep him as a virtually silent movie character true to the TV series, but the physical humour set pieces are very hit and miss, and even when hitting they are ,mostly “smile moments” rather than eliciting an actual laugh.

As a family friendly film which is silly enough to brighten up most peoples days for 90 minutes this passes the time well enough, but there are certainly far funnier films out there for the family to enjoy.

Review by Dave from a disc supplied by Fabulous Films.