Review: My Stepmother is an Alien 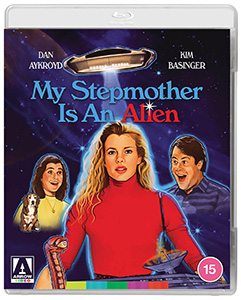 Widowed astronomer Steve Mills (Dan Aykroyd) pushes the limits of a work experiment too far (way too far), with the unexpected result being a race of highly advanced aliens sending one of their own down to Earth to investigate what has caused the sudden cosmic disruption.

Watching television transmissions to get a flavour of the planet while travelling to it, one of the aliens takes the form of a human female and dispatched onto Earth is ‘Celeste Martin’ (Kim Basinger); a beautiful woman tasked with seducing Steve to find out as much as she can about his scientific experiments. However, she didn’t count on actually developing real feelings for him.

None too happy about the new woman in Steve’s life is his young daughter Jessie (Alyson Hannigan), who begins to figure out that Celeste might not be all she seems…one giveaway being the ability to grab red hot items from the oven with her bare hands.

My Stepmother is an Alien is a typical example of a wacky 80s comedy; goofball over the top physical skits, one liners delivered with almost a wink to the camera, and an ending that you know is certainly going to happen after watching for only 10 minutes.

Aykroyd is…well…Aykroyd, and if you were not a fan of him before, there’s nothing here that will change your mind otherwise. While Bassinger uses her feminine charms to beguile the both the viewer and Akroyd’s character in a series of not so subtle scantily dressed moments.

If I was to use just 1 word to describe this movie it would be “silly”, and if you like silly things, then there’s enough stuff in this for you to enjoy. However, if you enjoy a more nuanced comedy movie, then this might not be your thing.

I’d only watched this once before when it had its initial VHS release and couldn’t remember a thing about it, and as the end credits rolled on this new blu-ray release, I was left not really sure if I enjoyed it or not.

Probably best enjoyed while indulging in your favourite tipple, this release looks and sounds great, while also having some good special features, including an interesting commentary track by critic Bryan Reesman.