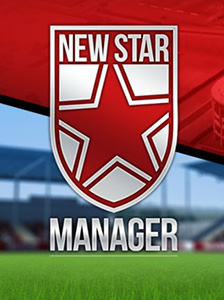 You may well have heard on our interview show with Kevin Toms that I was addicted to Football Manager on the Spectrum 48k back in 1982.

This obsession with football management games reached its peak with ‘Premier Manager 98’, a series I always preferred over the ‘Championship Manager’ games (before it then went on to be called ‘Football Manager’), and a statement that I know will elicit a few jeers from people who much prefer the more in-depth and realistic Champ/Football Manager games.

Therein lies my problem with football management games these days; they are too in-depth. With so many things to micromanage and screens drilling down to the minutiae of just about everything, I get swamped by options and that feeling of ‘fun’ while playing them disappeared for me. And yes, I know that a lot of it can be automated, but I much prefer the days when I had control over everything without being overwhelmed.

The fun factor returned when Kevin Toms released Football Star Manager and that rekindled my love of football management games, while myself and Chris also both got addicted to New Star Soccer and have talked about it on previous podcasts.

So it was with baited breath, and a touch of hesitant excitement, that I entered the digital code for New Star Manager into my PS4.

20+ hours of gameplay later (at time of writing) I’m approaching the end of my 3rd season in the Welsh leagues, I’m a level 17 manager, and I’m completely hooked on a game that feels as though it was made especially for me.

You navigate between 6 main screens:

Each of these screens have various subsections. For example, the ‘Home’ screen also has links to your manager profile statistics, which in itself also branches deeper in ‘profile milestones’, ‘silverware’ and ‘options’. 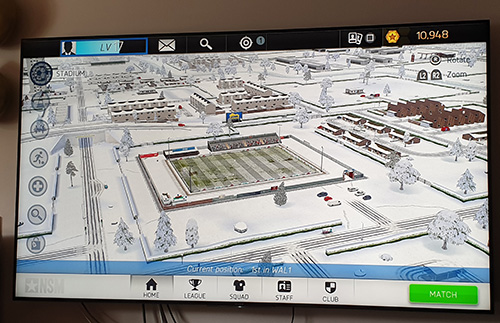 The home screen also gives you access to your inbox, a search function for players, ever changing targets to meet from the clubs board, your coaching cards, stadium stats, train, fitness, youth team, medical, scout, and your club store. It also changes depending on the time of year too, and as you can see in the photo above Chirk is going through a particularly bad winter. This also affects your games, and with an icy pitch the ball will move faster when crossing the ball.

Now you may well be thinking “hold on a minute, just a few paragraphs ago you were bemoaning that football management games had become too in-depth, and here’s a whole load of options and things to do just from the 1st of 6 screens you’ve mentioned!“

There is a lot of depth to Football Star Manager, but it is presented so well, and gives you just enough of everything to give that feeling of being in complete control of your club, but without completely overpowering you with options.

You begin by taking charge of a generic ‘New Star’ team and picking which leagues you’d like to play in.

There is the usual English, German, French, etc, but seeing as I live in Wales, I chose the Welsh leagues and immediately changed the name of my team to the village we live in.

Starting at the bottom of the Welsh leagues, it was a joy to see our local teams listed, and this instantly added a spark to the games against them. 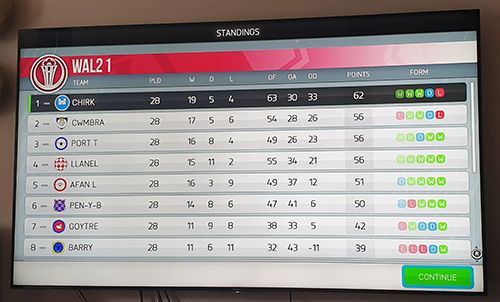 Your players are represented on cards (much like with FUT players in FIFA games), with their basic stats always on show. Each player can be clicked on for an expanded look at things such as age, health, happiness, contract details etc.

Energy levels are a big thing to keep an eye on, and these can be topped up with ‘NRG cards’, which are randomly generated when certain conditions have been met, such as the end of a game, or meeting the targets of your board.

However, it isn’t just the NRG cards that come in very useful, as all aspects of your team, staff and club are kept in order and upgraded through the use of various cards, as well as the ability to upgrade your main club buildings with the cash earned from gate receipts and your club shop. 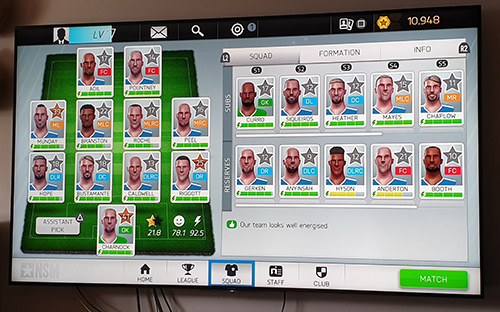 I’m aware that the free mobile version of New Star Manager monetized itself through the sale of additional cards that you could purchase, but the PS4 version has no such issues.

The random nature of which cards you receive add an extra tactical layer to the running of your club. Do you use your final skills card to raise the tackling of one of your defenders, knowing that doing so temporarily lowers his energy levels? Do you use a contract extension card on your star player to save yourself some cash, or do you save it and pay him out of your club funds? There are always decisions to be made that can alter your standing between yourself and your board, fans, press, players and staff.

There is a lot to balance and keep you interested, but as I stated before, not to the point of overwhelming you. 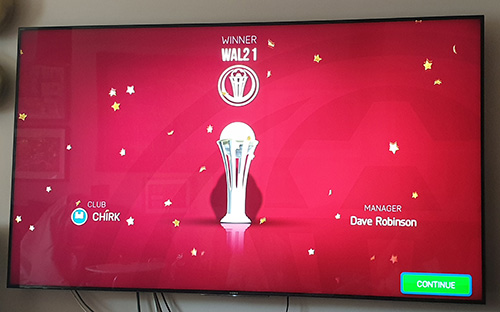 The matches themselves are superb.

After picking your team and substitutes, you can also change formation and tactics. It also helps to view your opposition and see what formation they are playing and if there are any particular players you need to keep an eye on.

It doesn’t just come down to the stats of your players either, as during the game warnings will come up about if the on pitch chemistry between players is off, or even if they just don’t like each other. This can lead to a substitution which can make all the difference in a game.

During the game you get control of your players for certain highlights. This could be a free kick or an attack from midfield.

I love these moments, as they play out like footballing chess. Nothing moves until you move your thumbstick, and everything stops again when you stop moving. This gives you the time to sit back and plan your best tactics.

You can send players off on a run and play a through ball to them, or draw a defender out of position and then pass to your open attacker. In all of the games I’ve played, I still get excited when I get the ball and the many different ways in which it can play out. It truly gives you a sense of you being in complete control of the result rather than some random AI.

Post-game includes a variety of things to do including press conferences (where you can be asked about who your fitness scout is, and getting his name correct earns you extra cards), dilemmas to sort out, board targets to meet, fan and press satisfaction to keep high, and much more.

I haven’t even touched on sponsorship deals, scouting for players and the “play your cards right” way in which you can save money (or overspend) on their contracts, or expanding your club buildings and the way they are represented onscreen and the bonuses upgrading can have. 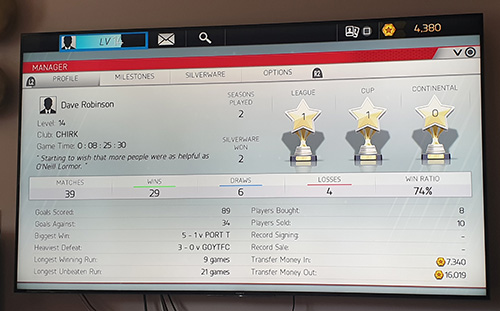 For a review that began with my saying I stepped away from football management games because they became too in-depth, and then bemoan the fact that I’ve barely touched on what this game has to offer may well sound like an oxymoron, but it is the presentation and balance of everything that New Star Games has (for me at least) got absolutely perfect.

I’ve tried to think of anything that I don’t like about this game, and I really did come up with nothing at all.

If I were to be ultra picky then maybe the allocation of cards could be a little more generous…but this would take some of the tension away when having to make decisions. Or the fact that your attackers have a tendency to run offside while you’re building an attack…but you can make them run back onside while you dribble the ball.

New Star Manager will not be for everybody…but what game is!?

The Football Manager crowd will still of course poor hours upon end into their annual franchise, while the FIFA players will do exactly the same with their game and say that FUT fulfils all they need.

However, for people like me who have dropped out of both of those franchises, this is absolutely superb and has that magical “just one more game” appeal to it…and I’m sure it could well have that effect too even if you play either of the other 2 aforementioned games.

Grab a cup of your favourite brew, put your feet up, and settle back to guide your local team to success…just make sure to prep yourself for those inevitable press questions!