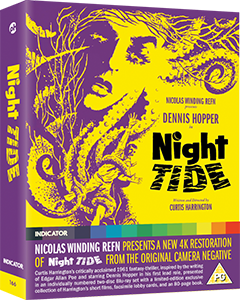 Dennis Hopper falls in love with a mermaid.

The above sentence tells all you need to know if you’ll have any interest in watching Night Tide, but quite honestly, who wouldn’t want to watch it after that brief synopsis!?

Johnny Drake (a young Dennis Hopper) is a sailor on shore leave who visits a seaside town, and while enjoying a beer in a local bar meets Mora (Linda Lawson) who works at the local funfair.

Meeting up for breakfast the next morning, Mora tells Johnny that she is one of the attractions at the fair and poses as a mermaid, charging people 25c a time to see her lying in a fake water tank with a mermaids tail attached to her.

Little does Johnny know that Mora’s obsession with mermaids runs deep, and that she believes she really is one.

Unperturbed by the thought of some aquatic love, Johnny is warned off by various townspeople, including Captain Samuel Murdock (Gavin Muir); an old seadog who discovered Mora on a distant island and brought her to America.

Johnny then learns that Mora has had 2 previous boyfriends, and both were found drowned in mysterious circumstances.

Will Johhny’s relationship with Mora go swimmingly, or will it sink without trace? (sorry, couldn’t resist those puns).

Written and directed by Curtis Harrington, Night Tide doesn’t outstay it’s lean 86 minute running time, and seeing a young Dennis Hopper play a shy and retiring sailor is worth every penny for that alone.

Its low budget is obvious by its minimal locations and onscreen production, but this charming and quirky tale keeps your interest throughout, never really knowing what is real and what is imagined, and creating a very similar atmosphere to Carnival of Souls which was released a year later.

Exclusive to this two-disc set is a bonus Blu-ray devoted to Harrington’s short films, encompassing his seven decades as a filmmaker and featuring experimental works, documentaries, and the two adaptations of Edgar Allan Poe’s The Fall of the House of Usher that bookended his career.

Yet another superb release from Powerhouse Films.

Review by Dave from discs kindly supplied by Powerhouse Films.