Review: One For the Road 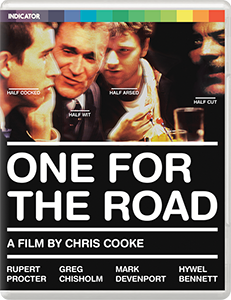 Directed by Chris Cooke from his 1999 short film Shifting Units, One For the Road tells the story of a group of men who have banned from driving and are on a rehabilitation course for drink drivers

Unfortunately the ‘look’ of the film is rather off-putting. In a time of HD and UHD, to sit through a film that looks like it was made on your grandfathers 1982 video camera is hard work (it shouldn’t be, but it is).

The cast, including Hywel Bennett and Rupert Procter, bond as brothers in male rage, drinking, shagging, impotence and the futility of it all as their court approved ‘Therapy’ leads them right back to the pub, where three of them plan to alleviate Bennett’s rich character out of a large amount of money.

I think this could be a movie that is ripe for a re-make as this version, although interesting, could do with a polish.

I used to live in Los Angeles and write about Rock bands. Now I live in wonderful Wales and write about films. I like video games (especially RDR2) and am also a painter...gratuitous plug: follow my art account on Instagram @artbytinar
Numskull Designs announce Silent Hill statue range Joanne Shaw Taylor announces “Blues From The Heart Live” album ahead of April UK Tour