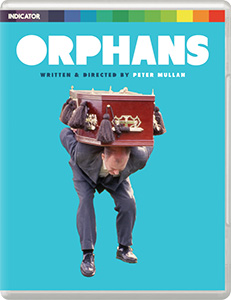 What a massive balls-up Film Four made by refusing to release Peter Mullan’s  film Orphans in 1998. To add to that insult they took all of Mullan’s outtakes and…burned them. Wow! What a shame, and what a loss to the UK film industry because Orphans is a true work of genius, a modern classic and worthy of rising above its cult status into the realm of being a cinematic national treasure.

Orphans was the first full-length film directed by Peter Mullan (who later won a Best Actor award at Cannes for My Name is Joe) and who went on to direct The Magdalene Sisters and Neds. It tells the story of four siblings: pompous Thomas (The magnificent Gary Lewis, one of the UK’s very best actors), ordinary guy, Michael (Douglas Henshall who looks like Botticelli painted him in this), sister Sheila who is in a wheelchair and has cerebral palsy (Rosemarie Stevenson), and angry young man John (Stephen McCole).

Following the siblings for a night out after the death of their beloved mother, and before her catholic funeral the next day, we see each person navigate that night, through grief, violence and bizarre hateful men who run pubs. This is the sort of film you could write reams about, the meaning and emotion and how it truly encapsulates all of life, through death.

Mullan’s early short films gave us an idea of not only what he’s capable of, but also where his head is; real people, real life, struggle, joy and profound extremes. Orphans appears to be quite serious but has several laugh out loud moments, but it’s a spiral into a surreal reality that is operatic in its grandeur. Who else can make the whole roof of a church fly off and it be completely believable?

Orphans is a real classic of cinema and holds hands with ‘Ke’s, ‘I, Daniel Blake’, ‘Red Road’, ‘Ratcatcher’ and ‘Fishtank’. I love Mullan in BBC’s MUM, but I wish he’d get the opportunity to direct more.

Special mention to the inclusion of the celebration documentary made by the BBC reuniting the cast for the first time in 20 years, and the inclusion of Mullan’s short films (including FRIDGE which is horrific).

A fantastic package from Powerhouse Films.

I used to live in Los Angeles and write about Rock bands. Now I live in wonderful Wales and write about films. I like video games (especially RDR2) and am also a painter...gratuitous plug: follow my art account on Instagram @artbytinar
BLACK MIRRORS Release Unplugged Single and Video Big Boy Bloater & The LiMiTs Announces ‘The Any Last Requests?’ Tour