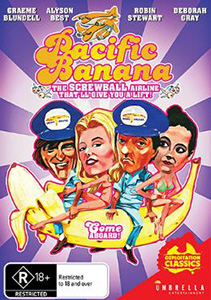 Imagine the lovechild of two 1970’s cinematic stalwarts of British comedy; ‘Carry On Pacific’ gets fruity with ‘Confessions of an Airline Pilot’. The result of this naughty tryst would be Pacific Banana.

The story is a simple one: Martin (Graeme Blundell) loses his erection every time that he sneezes. A condition that is unfortunate as he’s constantly surrounded by ladies who are more than willing to strip off for him (and the viewer too, as they wobble their butts and breasts into the camera at an alarming rate) and he always sneezes before they can play ‘Mr Wobbly hides his helmet’.

When Martin is sent to work at ultra-low budget airlines ‘Pacific Banana’, he meets Paul (Robin Stewart) ; a man whose libido is unparalleled. He is engaged to 2 woman (who both work together) and also beds any female who cares to unrobe for him…which is a lot.

Accompanied by a strangely compelling narration, Pacific Banana goes down as one of those ‘lads movies’ which is best consumned late at night, along with copious amounts of alcohol.

The acting, the story, and even the nudity is as cheesy as Paul’s nether regions (I’m taking a guess at that of course, but he didn’t look like he was as bothered about personal hygiene, or sexual health, as he was about getting his widge wet), but even on a weekday afternoon, sat alone, completely sober, it still raised a few giggles. There is even a custard pie fight! Which happens mid-flight! The comedy doesn’t get any more sophisticated than that.

If you like silly humour and looking at naked ladies, then it could well be worth you taking a ride with Pacific Banana, which is enhanced with some great special features on this release by Umbrella Entertainment.