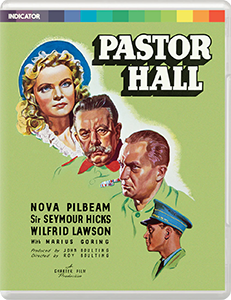 Newly restored from a 4K scan of the nitrate duplicate negative by Powerhouse Films and finally available on Blu-ray for the first time in the world, Pastor Hall is adapted from Ernst Toller’s 1939 play of the same name, and based on the true story of Protestant minister Martin Niemöller.

Pastor Hall could well be called “Propaganda Hall”, as it was one of the first anti-Nazi dramas ever made and had its original production delayed by British censors who were not yet ready to be openly critical of Hitler’s regime.

Based in the quiet German village of Altdorf when an SS platoon takes charge, Pastor Frederick Hall (Wilfrid Lawson) rejects the agenda of ‘The New Order’ and eventually is punished for his vocal opposition and is sent to Dachau, where, despite the abuse and brutality which he suffers, he refuses to give in to the madness and inhumanity of National Socialism.

I’m always a sucker for films based on true stories and this didn’t disappoint. While the acting can veer a little on the overdramatic at times, this didn’t dilute the message being given or the circumstances people were in during these times.

Tackling the atrocities directed at Jews, a discussion about abortion, and the rape of a 14 year old girl, Pastor Hall doesn’t hold back on its messages.

This new release from Powerhouse Films not only looks great, but is also accompanied by special features which give even greater meaning and gravitas to the main feature.