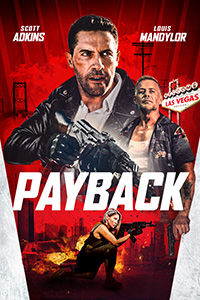 French (Scott Adkins) and Sue (Louis Mandylor) are debt collectors under the employ of Tommy (Vladimir Kulich), and are tasked with going on a road trip to shake up (read that as “kick the arse of”) some shady characters who owe considerable amounts of money.

While doing their travels they are also under the threat of hoodlums led by a drug kingpin who wants revenge on French and Sue for the death of his brother.

With trouble mounting at every turn, the pair have to resort to their quick wits and even quicker fists to stay alive.

While knowing this certainly helps to make sense of a couple of points made throughout the story, it is by no mean a pre-requisite to have watched the 1st movie before watching this one, as everything pieced together well with no prior knowledge of their characters or past (mis)adventures.

Scott Adkins once again puts in a solid performance, and is a believable ‘hard man’ who can face off against most people with an air of bravado and all with a cheeky line of wit in his dialogue.

However, the speech pattern of Louis Mandylor did begin to grate after a while, with a mumbled and staccato way of delivering his lines that made me wish he had less to say. Obviously continuing a performance decision made in the first movie, and nothing like he normally speaks, it’s just unfortunate that it made his character become unlikeable (and sometime unintelligible) for me.

Director Jesse V. Johnson  shows again that he can deliver entertaining action on a limited budget (myself and Chris chatted about how we both enjoyed Avengement in a previous entertainment show), and also seems to have a good working relationship with Scott Adkins from the numerous movies they have already made together.

Budget restraints do show at times, but not enough to stop you jumping in and enjoying the ride as fists meet faces with great regularity. Though it was some of the dialogue so casually delivered by Adkins that stuck in my mind the most.

A solid action flick, that while it didn’t tick as many boxes for me as the aforementioned Avengement, it was still an enjoyable watch.

Review by Dave from a streaming link kindly supplied by The Warrior Agency.