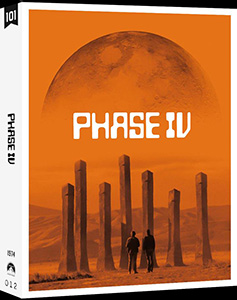 Anyone expecting a “killer ants” movie in a similar vein to Them! will be sorely disappointed when watching Phase IV for the first time. However, what it lacks in man-eating monsters, it more than makes up for with man-hating intelligent creatures.

An outer space phenomenon has affected a colony of ants by vastly increasing their intelligence, and with their collective mind focused on just one thing (ala the Borg from Star Trek The Next Generation), begin to attack 2 scientists (Nigel Davenport and Michael Murphy) who are based in an isolated research centre in the desert.

The only feature film to be directed by acclaimed graphic designer Saul Bass, Phase IV brings his keen eye for colour, composition and camera movement that he honed in many unforgettable movie title sequences, into an 84 minute slow burning exploration of how the tiniest of creatures can humble mankind.

The narrative is slow to develop, intercutting between the 2 scientists busy in their laboratory, and the various activities of the ants as they work in unison to achieve their goal. All of the ants being shot in extreme close-up (no models or cgi used here) as they burrow underground and build ever more elaborate structures overground.

The fate of many of the ants is shown both in close-up and slow motion, so any viewers who may be sensitive to the sight of real ants being squashed may well want to cover their eyes during those parts.

It is the ants though who continually outthink the humans, with each preventative measure the scientists put in place to protect themselves slowly being outmanouvered, like a high stakes chess game between man and insect. Each move leading towards the inevitable demise of whoever is the loser.

The sudden appearance of a confused young woman (Lynne Frederick) at the research centre acts as a division between the scientists, leading them to battle each other as well as their common enemy. All while the ants continue to increase in intelligence and numbers.

Phase IV takes its time to build the tension, allowing many moments of voyeuristic fascination as real ants “perform” in front of you, each one of them becoming more formidable as their actions are played out and the spine chilling consequences begin to amass. This is as far from 1950’s sci-fi “creature feature” as you can get.

While taking its time to fully draw you into the characters and their situation, Phase IV becomes locked in your mind by the time the end credits roll, and it is definitely one of those “once seen, never forgotten” experiences.

It is a damn shame that Saul Bass didn’t direct another feature film, but thanks to this great 2 disc release from 101 Films, it has among it’s special features 6 of his short films, which give you another taste of what might have been should he have been given another movie.

After watching this, you’ll think twice the next time you put ant killer by your back door.

Review by Dave from discs kindly supplied by 101 Films.