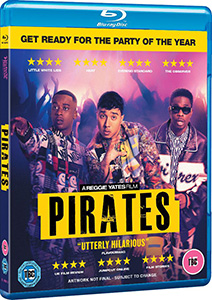 As an ageing white male living in the hills of Wales and a penchant for 80’s hair metal, I guess I’m not in the right demographic for a movie about 3 teenage lads in London spending New Years Eve 1999 desperately trying to get into a club to see in the new Millennium, all while a “banging soundtrack” plays throughout, of which I didn’t know any of the artists or songs…except 1…”Stars” by Simply Red.

So it is a strong tip of the proverbial hat to writer/director Reggie Yates and the 3 young leads: Elliot Edusah, Jordan Peters and Reda Elazouar, that their humorous antics during that crazy evening eventually drew me into their world and made me care for them…raising a good few smiles along the way…the aforementioned appearance of “Stars” being one of them and the reaction to it in their car.

The cinematography is great, showcasing nighttime London in all of its guises, from swanky clubs to low budget fast food joints, and while the narrative stalls at times, it’s never long before something happens to grab your attention again.

As is the case with quite a few movies featuring the “yoof of London”, I ended up putting the subtitles on as I was missing some of the dialogue…I’m just not “down with the kids” anymore and a lot of the lingo passes me by and leaves me with a puzzled look on my face.

Very much reminded me in a crazy way of Detroit Rock City: a group of young lads desperate to reach their goal while crazy things unexpectedly happen and slow them in their tracks, all with a little love story going on at the same time.

A movie that took me by surprise at how much it drew me into its unfamiliar world.

Review by Dave from a disc kindly supplied by Picturehouse Entertainment via Aim Publicity.