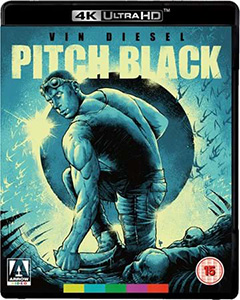 When a spaceship crash lands onto a desolate desert planet, it usually isn’t the best of days for all those that survive.

However, when you factor in that one of the survivors of the “Hunter-Gratzner” transport ship is Richard B. Riddick (Vin Diesel); a violent escapee convict who has been captured by bounty hunter William J. Johns (Cole Hauser), who also survived the crash, then everyone’s day just got that little bit worse.

Then add the facts that the planets indigenous creatures are flying flesh eating monsters who only come out at night and a month long solar eclipse is about to happen, it seems as those who didn’t survive the crash just might have got the better deal.

Thankfully Riddick has had his eyes “shined” while incarcerated in a dark and violent prison, and his ability to see in the dark is the only hope the remaining survivors have of possibly getting off the planet to safety.

Released a year before Vin Diesel shot into public consciousness as Dominic Toretto in The Fast and the Furious franchise, Pitch Black plays perfectly into his strengths of being a quietly intimidating character onscreen, who may also have more layers to him than just being a badass.

The surrounding characters may well be ones we are all familiar with: “the wiseguy”,the “scared one”, the obligatory child, but thankfully there is a strong female character in Carolyn Fry (Radha Mitchell); the spaceships pilot and who assumes command after the death of the captain in the crash.

The initial period after the crash has everyone sounding each other out and tentative alliances are formed, but when it becomes apparent that they are surrounded by vicious flying creatures who will have the run of the planet for a month when darkness falls, those alliances become ever more fragile and the tension ramps up as the daylight slowly fades, leaving the final part of the narrative playing out in darkness with the survivors using every bit of light they can find to try and stay safe.

Pitch Black is Arrow Films debut UK 4k release and is a great example of how this format can breathe new life into a movie.

Presented in a native 3840 x 2160p resolution image in the film’s original theatrical aspect ratio of widescreen 2.4:1, I lost count of the amount of times I saw things that I’d never seen in previous viewings where details were lost in a dark and muddy picture.

It’s not just in the night scenes either where this disc “shines” (pun fully intended), as director David Twohy gave the daytime scenes a stylised look which pop with a fuller colour palette in this release, and with beads of sweat and Riddicks “shine’ all the more visible in a fantastic picture that keeps the film grain and ups the detail.

The sound mix (while not being Dolby Atmos) is a great DTS-HD 5:1 mix with some low end subwoofer workouts which will have you holding on tight as the action ramps up.

Arrow Films always deliver great special features and this is no exception, giving 2 versions of the movie, 2 commentary tracks, interviews, behind the scenes footage and much more.

If this is any indication of Arrow’s future in the 4k market, then it is a very bright one indeed.

Review by Dave from a disc kindly supplied by Arrow Films via fetch Publicity.