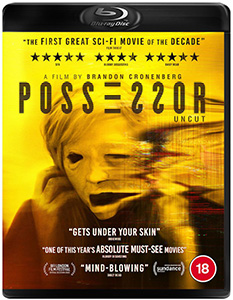 Possessor, directed and written  by Brandon Cronenberg (yes, David’s son), is  set in an ‘alternative reality’ of 2008,  starring Andrea Riseborough as Tasya Vos; a sort of hitman for hire, Christopher Abbott as the man she ‘possesses’, Tuppence Middleton, Sean Bean, and Jennifer Jason Leigh.

How can I explain the premise without ruining the story? Hummm –  Tasya Vos is an assassin who takes control  – she possesses –  of other people bodies to carry out her hits by using an implant installed in the unwitting hosts brain while they’re knocked out.

Vos and her employers (Jason Leigh) use tech to insert her consciousness into their minds. She then returns to her own body by forcing the host to commit suicide at the end of each job.

Riseborough is an actress who isn’t afraid of taking on difficult roles (Mandy, The Devils Whore, Black Mirror) and here she gives a sort of ethereally fragile, and damaged performance as Tasya, an assassin who yearns to be with her family and is graphically haunted by the murders she’s committed.

Abbot also gives a nuanced performance as a man fighting against the intruder in his body, struggling and overpowering. It’s a difficult film to describe because as the old saying goes, “the apple doesn’t fall far from the tree”, and here Cronenburg’s past utopian vision is as disturbing as anything his dad produced. Thankfully Brandon is his own man, and despite the surname and content, this is his film.

Apart from the set dressing (which is beautiful and retro yet …new) the stand out here, and what gives this story a visceral glow, are the practical effects (highlighted in some of the very informative special features). Oh my – such a joy to see so many head pulpings and gore. Melty meldings and trance lighting. The effects just add to the story, almost as exposition, and are beautifully done.

Cronenburg is definitely someone who’s on the right track, and perhaps I could liken the film to some of Christopher Nolan’s films, where he treats the audience like they ‘get’ it, and we do.

Extras:
• Deleted Scenes
• A Heightened World: The Look Of Possessor
• Identity Crisis: Bringing Possessor To Life
• The Joy Of Practical: The Effects Of Possessor
• Short Film “Please Speak Continuously And Describe Your Experiences As They Come To You” By Brandon Cronenberg

Review by Tina from a disc kindly supplied by Signature Entertainment via Witchfinder PR.

I used to live in Los Angeles and write about Rock bands. Now I live in wonderful Wales and write about films. I like video games (especially RDR2) and am also a painter...gratuitous plug: follow my art account on Instagram @artbytinar
Dystopian Point-and-Click Adventure ENCODYA is Now Available on Steam and GOG HEART HEALER : ‘The Metal Opera by Magnus Karlsson’ – debut album out 12.03.21 (Frontiers)