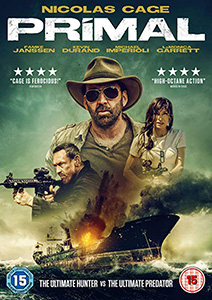 Frank Walsh (Nicolas Cage) is a hunter of exotic animals, he catches them then sells them to the highest bidder. On one hunt he unexpectedly (using a knock out potion of his own invention) catches an ultra-rare albino jaguar.

He excitedly returns to the remote Brazilian village ready to ship it back to the good old US of A, when he’s told that this Jag has been served human sacrifices for years, and is therefore a literal MAN EATER…Da da DAAAAA.

Yes folks, Cage must have needed some cash because he’s made another one of his hokey heavy CGI-tatstic slices of awesomeness. How else can you describe a film that promises in the trailer, white jaguar action, but infact gives you something even better. A somewhat reigned in (I kid you not) Cage who out acts everyone onscreen, and a completely frozen Famke Jansson.

Walsh’s various animals are caged and put onboard a ship, which is also holding some ex-army assassin (Kevin Durand in full scenery gnashing bonkersness) guarded by several peripheral CIA/FBI/Who cares?-men. And Famke Jansson.

This is without a doubt HER film. Never have I seen such wooden acting. She is abysmal to the point of not even looking at the character she’s talking to and being in an apparent major sulk the whole time.

Normally I wouldn’t mention the visage of an actor but her botox frozen features add to her woodeness to the point of her smooth features and inability to emote whatsoever, reminding me of a Chinese made sex doll with the mouth firmly glued together. Constantly repeating the line  “wrrr yew a goooud mon fwank“? (‘are you a good man Frank’) as she seems unable or even unwilling to part her incredibly swollen lips. She is a car crash and elevates this films into the SO bad its good arena.

The thing is, if she was removed from the film this actually has the propensity to be half decent. Cage is his usual wonderful self, and seriously has the charisma to carry this off.

It is however, your usual run of the mill action film that could have been a lot better if it had a lot more jaguar, and a lot less moody sex doll.

Primal is on Digital Download 10 February and DVD 17 February from Lionsgate UK.

Review by Tina from a disc kindly supplied by Lionsgate UK via Witchfinder PR.

I used to live in Los Angeles and write about Rock bands. Now I live in wonderful Wales and write about films. I like video games (especially RDR2) and am also a painter...gratuitous plug: follow my art account on Instagram @artbytinar
Soundcheck interview: Jackie Chambers SILVERTHORNE release their debut EP ‘Tear The Sky Wide Open’ on 21st February