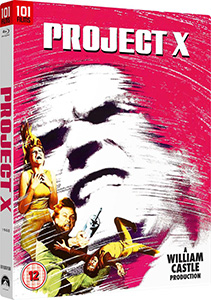 Produced and directed by William Castle, Project X is a 60s sci-fi film with visual aesthetics that kept me captivated throughout its twisting narrative.

Released on Blu-ray for the 1st time in the UK, and complemented by a brand new documentary ‘Money Back Guarantee: William Castle’s Ingenious Gimmicks’, along with a new audio commentary by film writers Allan Bryce and David Flint, Project X has the cinematic DNA that was later shown in two Keanu Reeves movies: Johnny Mnemonic and The Matrix.

Set in an overpopulated 2118, the world is split into two main powers of the East and West, and when secret agent Hagan Arnold (Christopher George) is brought back to life from being cryogenically frozen after a plane crash during one of his missions, scientists try to uncover the secrets that are locked away in his mind.

These secrets could well stop an impending catastrophic war between the East and West, but in order to unlock whatever is hidden deep in Hagan’s mind, the scientists have to give him a different ‘matrix’…which is essentially a new personality and life to lead.

One of the personalities given to him is as a gangster living in 1968…very handy for the budget!

It is a race against time to recover these hidden memories before the balance of the worlds power is lost forever.

Although having a low budget, I found Project X visually stimulating, albeit with very lo-fi effects.

Animation and lurid colours give a sense of unease and an ethereal quality to the narrative, complementing the inner turmoil of Hagan’s mind as he is lurched from one ‘matrix’ into another. Though the score can get a little overpowering at times.

The acting is fine across the entire cast, and Christopher George manages to elicit enough empathy to actually care about his character while he is being used as a scientific guinea pig.

Definitely not the 1st film to spring into minds when William Castle is mentioned, but one that should definitely not be overlooked ahead of his more well known projects.

An enjoyable and thought provoking film that is showcased wonderfully in this release from 101 Films.