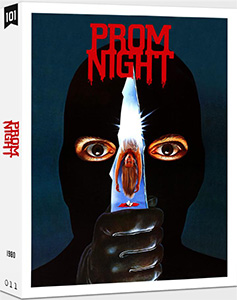 A group of children are playing ‘killer’ in an abandoned building when the game gets out of hand and a girl falls through a window to her death. The remaining children panic and run away, leaving a local paedophile to be the main suspect. He is hounded by the police and ends up badly bunt after a car crash and is put into an asylum.

Cut to years later and the surviving children are now grown up and preparing for their school prom night, while at the same time, the man who was blamed for the earlier death has now escaped and killings have begun to happen…as well as threatening phone calls being made to spoil the pre-prom celebrations.

Will the killer be caught? Will the prom happen? Will the disco music never stop?

Playing more like a horror/mystery/thriller than the ‘slasher’ movie that it has become known as, Prom Night takes its time for the killings to begin and instead invests its time into characters, the main one being Jamie Lee Curtis as Kimberly Hammond; one of the children at the beginning of the movie and who has felt guilty ever since.

The gore is minimal but effective…how can you not like a decapitated head rolling onto a stage in front of a packed prom gathering!? While the movie as a whole does a good job of creating a dark and brooding atmosphere, with long lingering shots where it’s not always quite clear as to who, or what, may be lurking in the shadows.

The dark atmosphere is shattered however with a crazy disco dancing scene that has to been seen to be believed….it’s quite hypnotic!

The usual horror movie tropes are clear and present, including the usual scene where the (briefly) incapacitated killer could easily have been killed with a discarded weapon, but the victim just runs away screaming instead, but having said that there are some surprises to be had.

Released on Blu-ray in the UK for the 1st time, and with a slew of special features that are well worth going through, this 101 Films release of Prom Night is definitely one to pick up ASAP.

Prom Night will be released on December 2nd, 2019.