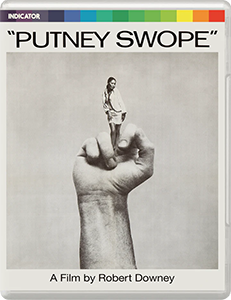 Putney Swope is one of ‘those’ films…normally at 60MW towers before we watch a film we head over to YouTube and check out the trailer. Having seen the trailer for Putney Swope, I was NOT looking forward to seeing it…very 1960s, and… hummmm. Seeing Robert Downey Sr. directed it gave it some novelty value but … hummmm.

Starring Arnold Johnson as Putney (but voiced by Robert Snr because the actor kept forgetting his lines) this 1969 story revolves around the only black advertising executive in a firm, who by chance is picked as the new chairman because the whole board votes for the one person who can’t win  – The Black man.

He then re-names the business ‘Truth and Soul, Inc.’, and replaces all but one of the white employees with black power and hippyish right-on jive employees and refuses business from companies that produce alcohol, tobacco or toy guns.

It’s so successful the President (Pepi Hermine), who is a small person married to another small person, considers it a threat to the national security.

With bit parts like Antonio Fargas as a … ummm Arab. This is one weird film. One that we at 60MW couldn’t stop watching! And what’s more, we laughed at it, more than once. One of the adverts for ‘Face Off’ cream involves a song with lyrics about beavers and dry humping, making you not really think that it’s probably one of the first inter-racial kisses of cinema.

In 2016, the film was selected for preservation in the United States National Film Registry by the Library of Congress as being “culturally, historically, or aesthetically significant”, and for 1969 it is. Quite stinging and still relevant, and most of all funny and surreal, Putney Swope is a surprise of a film, and deserves it’s cult status.

I used to live in Los Angeles and write about Rock bands. Now I live in wonderful Wales and write about films. I like video games (especially RDR2) and am also a painter...gratuitous plug: follow my art account on Instagram @artbytinar
Ayvianna Snow stars in 2 new films showing at Frightfest KISSIN’ DYNAMITE embark on German Tour + release new single & video