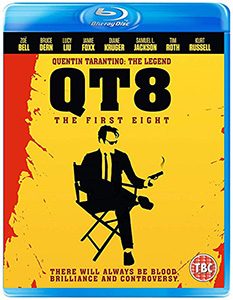 Quentin Tarantino first came into the public eye in 1992 with his debut feature film Reservoir Dogs. 27 years later his 9th film, Once Upon a Time…in Hollywood, was released in cinemas worldwide, with critical acclaim from both critics and the general public.

QT8: The First Eight is a fascinating documentary which covers the making of his first 8 movies, complete with interesting and informative stories from the people who were there: editors, producers, camera operators, actors, etc. These stories not only give an insight into the making of the movies, but also help to give a more rounded perspective of Quentin Tarantino himself. In fact, this leaves you in no doubt that Tarantino is truly an auteur.

The documentary features appearances from a lot of people who will be instantly recognisable to you: Kurt Russell, Samuel L. Jackson, Jennifer Jason Leigh to name just a few, but very often people from ‘behind the camera’ pop up on screen and it could have been confusing to the viewer as to who is who as the interviews cycle between different people. This is overcome though by a great little graphic at the bottom right of the screen, where not only do you see who it is onscreen, but there is also a visual representation of the movies they worked on with each movies individual avatar highlighted.

QT8: The First 8 is not just ‘talking heads’ either, stories are accompanied by clips from the movies and some fantastic animated sequences which help to illustrate what happened. At no point during the 2 hour running time did I ever become bored or look at how long was still to go, in fact I could happily have sat for another 2 hours and absorbed more great tales about Tarantino.

It is not just ‘on set’ stories either, it dives into his creative process during pre-production and post-production too, as well as what happens at screenings and live events.

I’ve never been a huge Tarantino fan…don’t get me wrong, I’ve always liked his movies, but never lauded him as a lot of people do. However, this documentary has made me reassess his body of work, and I certainly appreciate him and his movies a hell of a lot more now.

QT8: The First 8 spotlights why the 3 words “a Tarantino movie” are enough to get people going to the cinema and is a fascinating look behind the camera and into the man.

A highly recommended documentary…just get those 8 movies ready to watch, as you will want to revisit them after seeing this.

Review by Dave from a disc kindly supplied by Signature Entertainment.