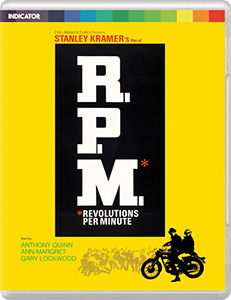 Prof. F.W.J. ‘Paco’ Perez (Anthony Quinn) is a liberal college professor during the late 1960’s when student activism was prevalent.

A group of radical students have taken over the college and the president resigns. In an attempt to win their favour, the school board appoints Paco with the role of president of the college, as they believe that his long held positive views on student activism will win him favour with the dissenting students, and allow him to end the standoff.

The students have 12 demands that they want met, and while Paco manages to get 9 of them agreed with the college board, it is the final 3 demands that push his relationship with the student activists, and indeed his own long held political beliefs, to breaking point.

R.P.M. is heavy on dialogue and social commentary, some of which dates it and places it firmly into the zeitgeist of the late 60’s and early 70’s, while other moments are still (unfortunately) still relevant to the world today.

The usual movie trope of casting actors who appear far too old for the college parts they are playing is all too prevalent here, and despite the usual solid performance from Anthony Quinn, most others of the cast are largely forgettable…as is the quasi-political ramblings that often are spewed from them with venom towards ‘the system’.

A slow burner of a movie that escalates towards an inevitable climax where promises are broken, along with the political and social dreams that accompanied them.

You can buy R.P.M. by clicking HERE. ALL money raised by purchasing from Amazon via our website is given back to our listeners and followers in upcoming competition prizes. The more people buy, the bigger our prizes.

ABC of gaming: January 2019 Review: Dave Made A Maze