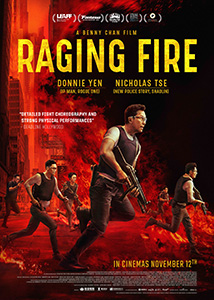 Staying loyal to his convictions, Bong tells the truth in court, condemning his once gang of colleagues and friends to a prison sentence.

Years later Bong is put onto a case to solve a series of violent murders, which slowly begins to lead him down a dark and violent path.

Raging Fire uses its 2 hour plus running time to not only display some wonderfully entertaining action sequences, but also takes the time to craft characters that I cared about, making the situations that they ultimately found themselves in all the more emotionally engaging.

Benny Chan captures everything with graceful and considered camera moves, never leaving the audience confused as to what is going on when the action takes place (unlike a lot of action movies where ‘shaky cam” and quick editing just leaves me confused and with a headache). Here Chan lets the camera roll in longer takes, allowing you to fully appreciate the kinetic action sequences in all their glory. And what action sequences there are…one particular car chase culminated in Donnie Yen and a small child (I’ll not spoil exactly what happens) doing something that elicited an audible ‘WOOHOO’ from me.

Yen of course is highly watchable, whether its while kicking ass or in quieter character driven scenes. It’s always a treat to see him onscreen.

The cinematography by Yuen Man Fung is stunning, with each scene (be it interior or exterior) looking like a colourful work of art, with a plethora of colours spread across the frame.

Benny Chen will be very much missed, and as a final testament to his filmmaking skills, Raging Fire definitely burns bright.

Get to see it on the big screen in selected cinemas in the UK from today…then get your pre-orders placed to add it to your movie collection when it’s released in January next year.

Review by Dave from a streaming link kindly supplied by Trinity CineAsia via  The Warrior Agency.