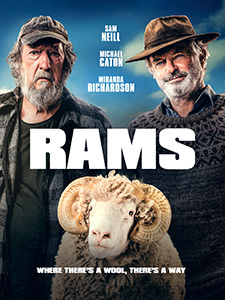 A remake of Grímur Hákonarson’s 2015 Icelandic film also called Rams, this is the story of 2 Australian outback brothers: the more affable Colin (Sam Neil) who tells his sheep daily how beautiful they are, and the pissed, miserable, disliked Les (Michael Caton), who despite more or less living side by side on a sheep farm, haven’t spoken for 40 years.

But Colin has other plans.

Unlike its Icelandic counterpart, the Australian Rams is a black comedy with a lot of genuine warmth, and this is down to Sam Neil, not only his performance, but also the fact that anyone who follows Sam on Instagram can see that he really does love sheep…. and pigs…. geese, ducks, dogs, why I wouldn’t be surprised if one day an elephant turns up on his feed.

So despite its formulaic story of 2 warring brothers joining together begrudgingly against a common enemy, it IS funny and it’s very heart-warming.

A good film for these mad times…Bonza!