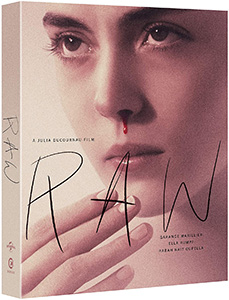 What an amazing first feature for director Julia Ducournau. Released in 2016, Raw is one of those films that seem to be sent from movie heaven it’s that good.

It’s a coming of age story about Justine (Garance Marillier), a clever and somewhat sullen and spoilt second daughter of a strict vegetarian family.

Justine begins to attend the vet school with her sister Alexia (Ella Rumpf), carrying on the family tradition, as both parents attended before her.
As a new student she has to take part in several hazing ceremonies, one involving eating a raw rabbit liver, and like her sister the year before her, she has a reaction to it.

It caused a stir on its release and is another film infamous for its walkouts, and it IS hard to stomach while you’re eating chilli (as I was), but in a good way.

It has humour in its carnivorous horror with Justine once a strait-laced, straight ‘A’ student, seemingly following in her wilder sister’s footsteps by partying and eating raw chicken, getting drunk and lusting after the tempting body of her very gay muscular room-mate.

What follows is like David Cronenberg directed We Are What We Are.

If you are NOT faint hearted,  like horror, and fancy seeing something surprisingly different, well acted, intense and enjoyably gruesome, look no further than Raw.

This limited edition blu-ray release from Second Sight Films is also packed with some great special features, as well as a bonus 4th art card if you order direct from their website.

I used to live in Los Angeles and write about Rock bands. Now I live in wonderful Wales and write about films. I like video games (especially RDR2) and am also a painter...gratuitous plug: follow my art account on Instagram @artbytinar
Chivalry 2 Console Pre-orders Available Now DUMPSTAPHUNK – United Nation Stomp ft. Marcus King