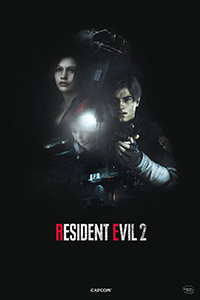 Resident Evil games have always held a special place in my heart. They have been a huge part of my gaming life, and the arrival of a new entry in the series makes me happier than a zombie about to munch on a juicy brain!

Resident Evil 2 is one of my favourite games of all time and I have very fond memories of picking it up in 1998. Everything about it was bigger and better than the original. The scares, the graphics, being able to play the story with two different characters. Heck, even the game box was epic as it had two discs and a special double case!

I played through the story multiple times and loved every gory, spine tingling moment!

Now you know my history with Resident Evil 2, I’m sure you can imagine my excitement when I heard that a brand-new remake was in development. I would have been happy with a HD remaster, but what Capcom have delivered goes way beyond my expectations.

For those of you who don’t know, Resident Evil 2 takes place in Racoon City shortly after the events of the first game. Rookie cop Leon S Kennedy is travelling to his first day on the job when he meets Claire Redfield, who is searching for her brother Chris. Very quickly all hell breaks loose, and they find themselves separated in the middle of a zombie outbreak.

You can start the game with either Leon or Claire. Both characters have a similar journey and goal however, they meet different characters along the way which provides a good amount of variety. I did find that once I finished the game with Leon, I completed Claire’s campaign in half the time, as I was familiar with item locations and puzzles that initially baffled me.

One of the major changes from the original are the fixed camera angles which have now been replaced for a traditional third person perspective. It is clear to see from the outset the remake has been expertly built from the ground up with an astonishing amount of love, care and attention to detail.

Everything looks incredibly beautiful and I was thoroughly impressed, especially when playing on an Xbox One X. The lighting and character animations in particular are superb and you can tell how far graphics technology has moved on in 20 years when compared to the 1998 version.

To say I was frequently wowed with the sound effects and music is an understatement! The game feels alive with every creak, groan and footstep adding an extra layer of tension and atmosphere which really puts you on edge. If you have a decent pair of headphones then I would definitely recommend using them to fully immerse yourself in the terror.

The monsters you face are deadly and grotesque. The zombies in particular take some punishment, and sometimes multiple headshots don’t keep them down. This can cause some panic, especially as ammunition is quite limited. However, it didn’t stop me occasionally shooting the arms and legs off a zombie and watch as it wriggled around the floor trying to bite my face off! I’m perfectly normal in real life…..honest!

There is plenty of value for money as you can complete the game up to four times with both characters. There is also free downloadable content called Ghost Survivors which comprises of three separate scenarios with characters from the game. These include ‘No Time to Mourn’ which features a grief-stricken father whose daughter has been infected. ‘Runaway’ is about a woman trying to escape from a demented Chief of Police and finally, ‘Forgotten Soldier’ lets you play as a Special Forces operative trying to retrieve the G-Virus.

Overall, the most impressive thing about the game is that it retains a lot of what made the original so special, but manages to feel completely fresh. The locations remain largely the same and I soon remembered puzzles that I had tackled 20 years ago. However, the changes in gameplay, graphics and sound transform it into a brand-new experience, which gave me another chance to fall in love all over again with a game I’ve adored for years.

Resident Evil 2 is a stunning piece of work on every level and has now set the gold standard on how to remake a classic game. If you love the original then buying this is a no brainer. If you haven’t played Resident Evil 2, now is the chance to experience one of the best games ever made in its full glory. If someone from Capcom is reading this, pretty please can you make my day and give the same treatment to Resident Evil: Code Veronica.

Resident Evil 2 is available now on Xbox One, PS4 and PC.

I love video games and movies as much as I love my children. However, I'd rather face off against the worst end of level boss, and watch the scariest horror movie than visit another soft play! Thanks for taking the time to visit the website and read this review. Please send any complaints to Dave and any money to me!
New single from Fugitive Review: Horror Express