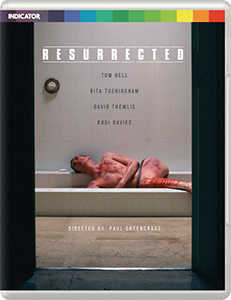 Kevin Deakin (David Thewlis) is a young soldier in the Falklands War who, while trying to help a fellow army member, is caught in the blast of a nearby explosion. Regaining a modicum of consciousness, he roams the desolate Isle until finally hunkering down for an extended period of time, confused and scared, and desperate for survival.

He eventually comes across a remote farmhouse whose residents take him in and tell him that the war ended almost 2 months ago. In fact it ended not long after he was caught in the explosion that fried his senses.

Returning home he is accused of desertion and undergoes an Army hearing where he is eventually cleared. This however is not the end of his nightmare. People in his home village now treat him as a coward, and his fellow Army squad want to know the truth about what happened to him and will stop at nothing to get what they want.

The first feature film from Director Paul Greengrass, Resurrected is based on a true story, which makes the events that happen all the more hard hitting…in every sense of the term.

The mental and physical affects of war are plain to see on all who were lucky enough to return home after the war, but even though the blood spilling has finished on the battlefield, there is plenty more to spill on home ground.

With excellent performances throughout, Resurrected is a gripping recreation of one young mans battle to survive not only a war that he was thrown into at such a young age, but also a battle for survival upon returning home and faced with enemies who he once considered as friends.

A nail biting story that has you constantly gripping the arms of your couch as you fear for what may happen next.

Resurrected is released on 27th January 2020.