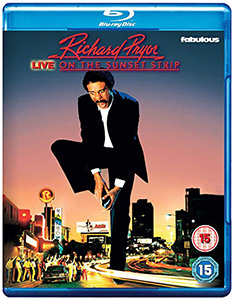 Released on Blu-ray for the first time, Richard Pryor Live on Sunset Strip captures the iconic comedian at the top of his game infront of a capacity crowd at the Hollywood Palladium.

Compiled from performances across 2 nights (where apparently Pryor lost his train of thought during the 1st evening, forgot the majority of his material and finished the show early…much to the annoyance of his audience) this is 81 minutes of laugh out loud comedy.

Nothing is off limits as Pryor recounts a trip to Africa, playing in Mafia-owned clubs and strip joints, and a fantastic telling of ‘Pryor on Fire’; an incident which nearly killed him during his booze and drug fuelled past.

Not every story is a home run, but the occasional lulls in the laughs are soon dispelled when the next hilarious tale appears.

The humour is also accompanied by moments of pathos too, and Pryor is not afraid to bare his soul in front of an audience.

Sadly no longer with us, this Blu-ray release from Fabulous Films is a fantastic way to keep Pryor alive in our minds and laughing along with him.

*The video below is NSFW*