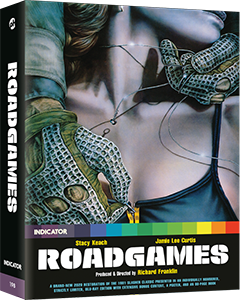 Pat Quid (Stacey Keach) is a lone trucker who plays ‘road games’ with himself and his pet dingo to pass the time on the long hauls across the Australian landscape. As he tries to guess the jobs and names of passing motorists, his radio keeps updating a news story about female hitchhikers that keep disappearing in the area. Upon picking up (against company policy) free-spirited hitchhiker ‘Hitch’ (Jamie Lee Curtis), their paths become intertwined with the mysterious stranger who is abducting the women, and so begins a chase to try and solve what is really happening.

Beautifully shot (and fantastically presented in this 4K scan of the internegative) by director Richard Franklin and cinematographer Vincent Monton, the stark and desolate Australian outback vistas are a perfect accompaniment to the rising tension that slowly unfurls as Quid gets himself deeper and deeper into a situation that he can no longer turn back from.

It’s another great performance from the always reliable Stacey Keach, who gives Quid a playful charm that you can’t help but be enamoured by. His relationship with Hitch is believable, despite the age gap (which Quid alludes to in the movie), because let’s face it, who wouldn’t want to bed Jamie Lee Curtis!?

While not containing any particular big action sequences (though a speedboat does get trashed in a rather spectacular way), Roadgames is all about the unbridled tension constantly boiling away as hot as the Australian air surrounding everyone.

Although the identity of the kidnapper is revealed early, this in no way detracts from the tension felt for the characters while watching the narrative progress.

A wealth of fascinating special features complete yet another “must buy” Indicator release.