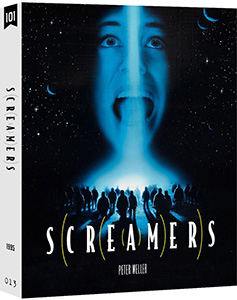 Based on the Philip K. Dick story “Second Variety“, Screamers is set on the distant mining planet Sirius 6B in the year 2078.

The planet is a husk of its former self due to many years of conflict between 2 warring factions, while underground killing machines (the titular ‘Screamers’) are not only still attacking people they come across, they are also becoming sentient and evolving.

When news reaches the planet that the war has been forgotten about back on earth and that both sides have been left to die, it is up to Col. Hendricksson (Peter Weller), commander of the remaining Alliance soldiers, to try and negotiate peace with what is left of the opposing New Economic Bloc.

However, the treacherous journey to reach his destination, is just the beginning of a series of events which scar both his body and mind.

Screamers overcomes its relatively low budget and limited special effects work to deliver an entertaining and intelligent sci-fi story that is helped by having Peter Weller in the lead role (as much as I love RoboCop, make sure to watch Of Unknown Origin for a great performance by him), while the rest of the cast do a decent enough job, with just a couple of exceptions.

With the budget restricting what director Christian Duguay could show on screen as far as sets and effects, it is left to the screenplay by Dan O’Bannon and Miguel Tejada-Flores to keep the narrative flowing and creating a tired and lonely world where hope seems to be in short supply.

Tension remains high throughout, and despite the odd “jump scare’, it is a slow building of tension and a prevailing sense of unease which keeps you wondering what the hell is going to happen next.

The overuse of a certain ‘reveal’ in the 3rd act of the movie does begin to get slightly tiresome when yet another…no, I won’t spoil it for you. But despite this, Screamers still delivers as a gripping sci-fi adventure 25 years after its initial release.

It looks great on this Blu-ray release from 101 Films, and is accompanied by some informative special features which only add to your appreciation of the movie.