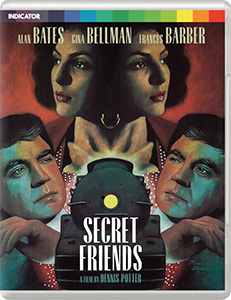 Imagine if you will, that the majority of movies you watch at your local multiplex are the cinematic equivalent of artwork by Bob Ross…easy to look at landscapes that can tell a full story with a few cursory looks.

Now imagine the cinematic equivalent of artwork by Jackson Pollock…made while he’s in the middle of an all weekend bender…that’s Secret Friends.

The only feature to be written and directed by Dennis Potter, Secret Friends narrative is dropped onto the screen in an almost stream of consciousness way, as Potter avoids traditional narrative progression, and instead drops the viewer into the many timelines of the interconnecting characters, and also into their minds and thoughts too…and even into what the characters think the other characters are thinking.

John (Alan Bates) is on a train journey when his thoughts and paranoia begin to get the better of him. Reality and time become a blur as his thoughts jump around in an attempt for him to come to terms with who his is and what he has done.

Scenes of him as a child cut to sexual fantasises played out with his wife acting as a call girl. Two men sat opposite him in the train blend from friendly fellow passengers to people to be feared…all as they shove a variety of food and drink into themselves, while the world outside the windows becomes as blurred as the reality that John is perceiving through his increasingly confused thought process.

Secret Friends is definitely not a movie that has mainstream appeal, but if your cinematic tastes are more eclectic than most, then you will find a lot to sit back and study. This is a movie where you could sit for hours afterwards discussing what you personally brought from the experience.