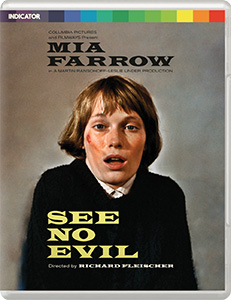 After being blinded in a horse riding accident, Sarah (Mia Farrow) visits her uncle’s home to recuperate. Meanwhile, in the local village we see from a ‘first person’ perspective a man with distinctive cowboy boots do various ‘bad’ things.

This is a real film of its time and positively reeks of ‘1971 British thriller’. Its almost Hitchcockian in parts. Directed by Richard Fleischer (10 Rillington Place), from a script by British writer Brian Clemens (The Avengers, The Golden Voyage of Sinbad), it features a cast of formidable British character actors. Released in America as See No Evil and in the UK and Europe as Blind Terror (with subtle differences between the cuts), Powerhouse Films have released both versions of the film for the first time ever.

While blind Sarah is out on a date with her boyfriend Steve (a very young Norman Eshley), the cowboy booted male murders her whole family because the father verbally admonished him days before in the village. Sarah returns from her date and spends the night in the house, unaware that three of her family members’ corpses are strewn about the house. She makes coffee and misses standing on broken glass in her bare feet, she lies on her bed totally unaware that her cousin is lying on the next bed raped and stabbed to death and when she finally finds out something is wrong (dead uncle in the bath) it becomes even more cringeworthy. I use that description in a positive way, because this film is so tense I spent the first 30 minutes in a ball of angst waiting for her to trip over someone dead.

I’ve never really been a fan of Mia Farrow, she was perfect in Rosemary’s Baby, but from then on, especially as Woody Allen’s one time muse, I found her slightly irritating with her blinky eyes and over the top ‘strong yet fragile womanliness’. In this film she does that blinky thing, but then as Dave pointed out to me, she IS blind. Also it’s not her fault that the story dictates she nearly runs over broken glass 200 times.

It’s also interesting that the local Gypsies are blamed for the murders, which takes the story off into ‘Straw Dogs’ territory. Something that would probably NOT be included in a film today as it would be overtly racist.

I can only applaud Powerhouse Films for it releases. So far every film of theirs I’ve reviewed (and seen, as Dave also has reviewed several), has been an old ‘classic’ – but almost a ‘cult’ classic that has more or less ‘disappeared’. Such as See No Evil. Despite wanting to strangle Mia Farrow myself, this is a really cool 70s thriller/horror and well worth a watch! It was only after watching the film that I then looked at the differences between the 2 releases of this film. The USA and UK versions are vastly different in tone, the US one appears more murderous and sexualized than the UK one.

A great interview with Norman Ashley is just one of the unmissable special features.

You can buy See No Evil by clicking HERE. ALL money raised by purchasing from Amazon via our website is given back to our listeners and followers in upcoming competition prizes. The more people buy, the bigger our prizes!

I used to live in Los Angeles and write about Rock bands. Now I live in wonderful Wales and write about films. I like video games (especially RDR2) and am also a painter...gratuitous plug: follow my art account on Instagram @artbytinar
Live Event: Neil Diamond – Manchester Arena, October 1st, 2017. Review: A Man Called Ove