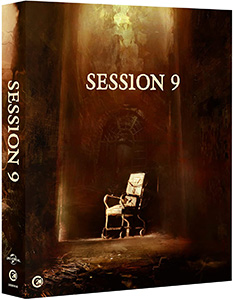 Gordon (Peter Mullan) is the boss of an asbestos removal company, and while suffering with his own personal demons, he is desperate to win the contract to clean up an abandoned State Mental Hospital.

The rest of his crew have their own personal foibles that they bring into the project, but none of them counted on the building itself having a dark and mysterious past that would affect them all.

No more need be told about the narrative of Session 9. Go into it knowing nothing more than that and be prepared for the hairs on the back of your neck to rise while watching.

Everything plays out in a languid manner, with each character weighted down by their own thoughts and problems, only to be drawn into an ever darker place by the building in which they are working. Tensions between everyone getting pulled tighter with each passing minute, and snippets of peoples past being revealed as everyone begins to lose their grip on reality.

Seemingly innocent conversations are revealed to have other meanings, and you’re left never knowing who to trust or what is going to happen next. All of which keeps you guessing as the characters thoughts and actions get ever darker.

While not having a huge budget ($1.5M), the look of the movie adds to the atmosphere of everything, helped by fantastic performances by all involved, especially Mullan as the under pressure boss, and David Caruso as Gordon’s friend and colleague, and the lack of levity keeps everything and everyone grounded in an oppressive atmospheric situation.

The real star of the movie though is the abandoned Danvers State Mental Hospital, a real life location whose derelict rooms and hallways have a palpable unsettling atmosphere that permeates through the screen and makes its way under your skin, making you as uncomfortable and aware of the surroundings as the characters themselves.

More of a psychological thriller than a horror movie, Session 9 stays with you after viewing, leaving you feeling a little disturbed and certainly wary of going into any old buildings!

Session 9 is a movie that I first watched on DVD many years ago and really enjoyed it, so when Second Sight Films announced that it was going to be another of their limited edition blu-rays, I was of course very excited at the news…and once again it is a superb release by them with informative special features, accompanied by great physical extras too (see below).